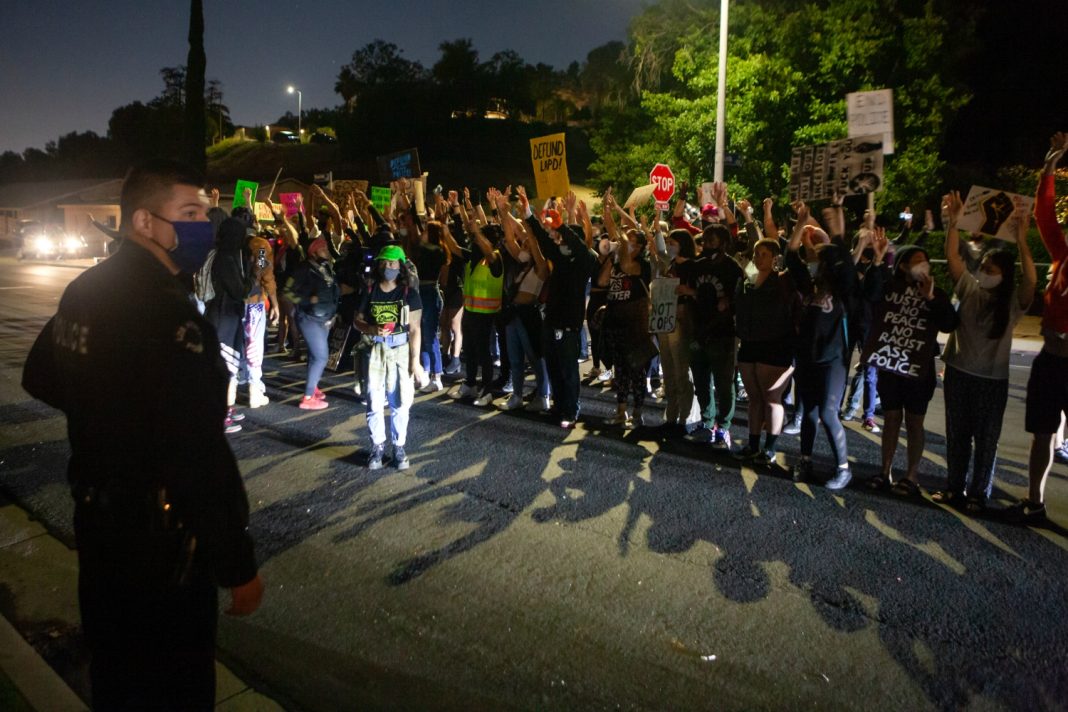 A group of around 80 protesters descended on the Granada Hills home of Los Angeles District Attorney Jackie Lacey on Thursday night to call for her resignation. Led by the group Black Future Project, the hours-long action remained peaceful, even as protesters defied police orders to stay 100 feet away from Lacey’s home and to stop using megaphones and speakers.

Even before the action began at around 8 p.m., officers who identified themselves as being with the District Attorney’s office stood sentry in Lacey’s driveway. Earlier, they had drawn a perimeter in chalk around the house with the words “90 feet,” a reference to a Los Angeles Municipal Code that limits protests within 100 feet of private residences.

Black Future Project is a newly formed collective of activists that has grown out of the protest movement following the murder of George Floyd. James Butler, a performer and YouTuber, founded the group with a handful of other activists after they were arrested by the LAPD on June 3 for protesting in front of Los Angeles City Hall in violation of curfew. Black Future Project now calls that same space home, with more than 30 tents pitched in the shadow of City Hall for a “24/7 protest” of police brutality and systemic racism.

“Through strategic non-violent political action we are using civil disobedience to fight and defeat systemic racism,” the group’s mission statement reads. “We won’t give up until they give in!”

Lacey has served as District Attorney since 2012, when she became the first African American to lead the largest prosecutor’s office in the country. The ascension of the South L.A.-native to the office was seen as a hopeful moment for L.A.’s Black communities, but many have grown disillusioned as her tenure’s progressed.

“We all look to our best and brightest as a community of color, whether that’s Latino, whether that’s Black, whether that’s Asian,” says musician and activist Kenneth Carter, who was at the protest. “And we look for people to aspire to in positions of leadership because we think that when they get there they’re going to make a difference.”

But Carter’s initial optimism about Lacey’s rise gave way to disappointment. “She has her own agenda and her agenda is not L.A.’s agenda,” he says.

At issue has been Lacey’s failure to charge officers who’ve killed civilians while she’s been in office. She’s defended her record, telling Spectrum News 1 in a June interview, “As DA for the last seven years, we’ve actually prosecuted 21 officers for excessive force. And I’m the only DA in the state who has a pending officer-involved shooting case.”

But as protesters have pointed, even when then-LAPD Chief Charlie Beck made a rare recommendation to prosecutors to file charges against an officer for an on-duty shooting, Lacey declined to do so.

“Prosecutors cannot ethically charge a person with a crime if they do not believe a jury would convict the person of that crime,” she said in a statement at the time.

Yelling through a megaphone, Butler brought up the death of Kenneth Ross Jr., a 25-year-old Black man who was shot and killed by Gardena police in 2018. Police were responding to calls of an active shooter in the area when they encountered Ross. Body camera and dashcam footage showed that Ross was running away from police when he was shot, according to ABC. Reports indicate that Ross struggled with mental illness. Police later claimed to have found a gun on Ross’s body, but Ross’s family contests that claim.

Responding to calls to prosecute the officer who killed Ross, DA Lacey said in a statement, “After an exhaustive review of the facts, my office determined that the officer acted lawfully in self-defense given that he believed Mr. Ross was an active shooter.”

Protesters stuck around outside Lacey’s home until around 11 p.m., at which point they began marching through the neighborhood, issuing chants like, “Your neighbor’s about to be fired,” and, “Your neighbor is a murderer.” Cautious and, at times, irritated neighbors looked out through windows, filmed the spectacle on phones, and occasionally yelled at protests for making noise so late at night.

Following a hotly contested primary election in March, Lacey is headed for a November runoff against former San Francisco DA George Gascón, who is running as a progressive alternative to Lacey. Based on the primary’s results, Lacey seemed well positioned to be reelected, but Gascón, a former LAPD cop himself, has managed to gain traction amid recent protests against police brutality. Congressman Adam Schiff recently withdrew his endorsement of Lacey, noting in a tweet that it was “a rare time in our nation’s history.”

“We have a responsibility to make profound changes to end systemic racism & reform criminal justice,” Schiff wrote. Mayor Eric Garcetti also recently walked back his endorsement of the incumbent DA.

“What is more important to you—money, or people’s lives?” Butler called out at Lacey’s home. “Jackie Lacey’s job is to protect the police.”

The DA’s residence has been the site of repeated protests in the past year. On the eve of the March primary, protesters from Black Lives Matter-L.A. showed up at the DA’s home and were confronted by Lacey’s husband, who was armed with a gun.

“I will shoot you,” he tells Black Lives Matter-L.A. cofounder Melina Abdullah in a video of the incident. “Get off of my porch.” Lacey later apologized on behalf of her husband, saying that he had responded “in fear” but that he was “profoundly sorry.”

Although their garage lights remained on throughout the night, neither Lacey nor her husband were seen.