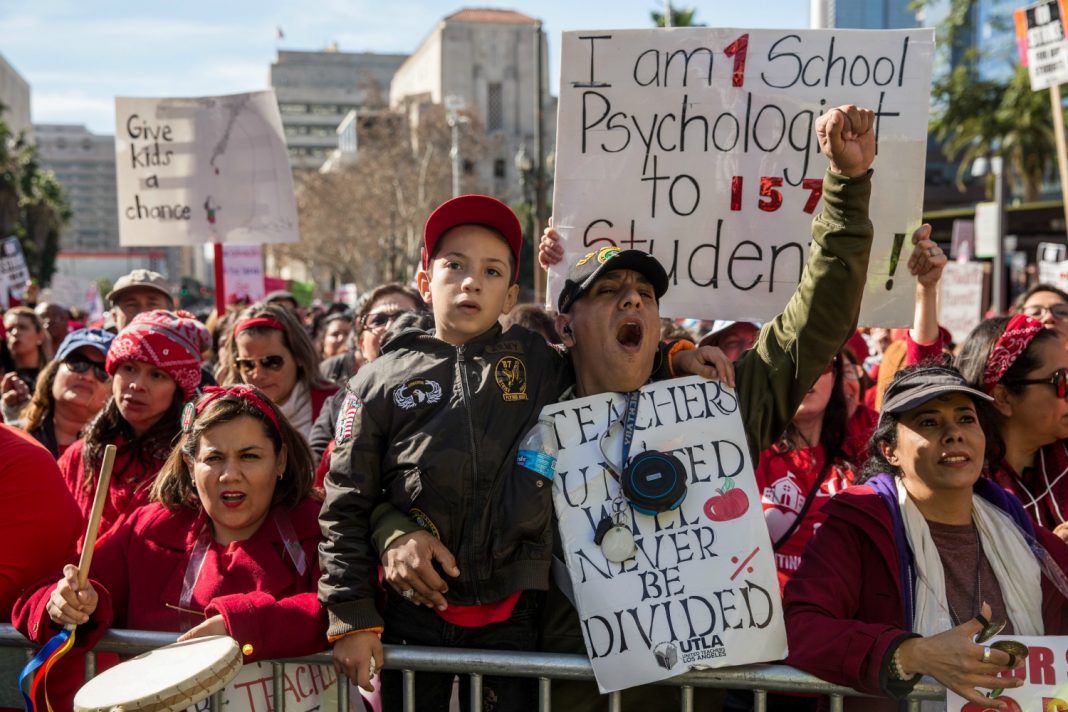 Less than two months after thousands of parents and activists took to the streets in support of striking L.A. teachers, Eastside voters went to the polls to elect a school board representative to replace Ref Rodriguez, who resigned last year in the wake of a campaign finance scandal. It was no surprise who finished in first place. That was longtime L.A. politician Jackie Goldberg, a former school board member from the 1980s (!) who went on to serve on both the City Council and in the State Assembly. The 74-year-old is a staunch teachers union ally, and is opposed to the further spread of charter schools in the district.

What was something of a surprise was her margin of victory. It was enormous. She received 48 percent of the vote—just two points shy of the 50 percent plus one threshold she needed to avoid a costly runoff in May, a startling result in a ten-candidate primary.

“It was a real mass movement,” an elated Goldberg told me on Wednesday morning. She credited her victory, in part, to the teachers strike, which had galvanized Angelenos. “I think it was a very big factor. I think people had not realized how underfunded public education had become. There were many people who were shocked that there wasn’t a nurse at every school.”

On March 5th, vote for Jackie Goldberg for School Board.
Experience and leadership do matter.
———
Join the education revolution at https://t.co/0BnTN2qFZx pic.twitter.com/TYGKr10ddM

Just who she’ll be facing in the runoff is still a mystery. As of now, Huntington Park council member and LAUSD councilor Graciela Ortiz is clinging to a 53-vote lead (or .21 percent) over Heather Repenning, a city commissioner and former aide to Mayor Eric Garcetti. There are still thousands of ballots left to be counted, some of which were dropped in the mail box yesterday and won’t even arrive at the County clerk’s office for another day or two. In other words, it could be weeks before we know who the second-place winner is, which would give Goldberg a valuable head start.

Should Repenning advance to the runoff, the race would likely become quite expensive. Repenning was the most politically connected candidate, having been endorsed not only by the mayor but a slew of other local elected officials and unions, including the SEIU local 99, which represents most of LAUSD’s service employees. The union spent more than $750,000 on an independent campaign to support Repenning and attack Goldberg, and Repenning herself raised another $280,000.

Ortiz would represent a very different challenge. As a Latina running in a majority-Latino district, with endorsements from Eastside politicians like City Councilman Gil Cedillo, she could benefit from a well of grassroots support.

The oddly shaped district includes a clump of neighborhoods north and northwest of downtown L.A. like Echo Park, Silver Lake and Los Feliz, and clump of independent cities south and southeast of the downtown, like Huntington Park, Bell, and Vernon (think True Detective season two). Both Goldberg and Repenning live in the northern part of the district, while Ortiz is an elected official from the southern part. Though voter turnout in the southeast cities tends to be fairly middling, Ortiz would have a virtual lock on that area, as Rodriguez had when he was first elected in 2015.

“They’re both very bright and capable people. Neither of them have my experience.” —Jackie Goldberg

No matter who wins, Goldberg would be the heavy favorite, having received nearly four times as many votes as either of the two closest challengers. That said, L.A. has seen some pretty wild special election runoffs, where turnout can be miniscule. In 2013, then-school board member Nury Martinez overturned a 19-point primary deficit to win the runoff by 10 points, a 30-point swing. That said, Repenning or Ortiz would need an even bigger swing of 37 points.

Asked whom she would rather face, Goldberg replied, “They’re both very bright and capable people. Neither of them have my experience.”

The seven-member school board is deeply divided ideologically. There are a number of sticking points, chief among them the spread of independent charter schools. There are currently two board members who are fairly sympathetic to the teachers union and skeptical of the charter movement, and three members who are the reverse. In somewhere approximating the middle is the idiosyncratic Richard Vladovic. A Jackie Goldberg victory in May would leave the board balanced on a knife’s edge. She would press for more oversight and more regulations on existing charter schools, and would likely work to stop their spread, although that’s tricky one, since their right to exist (and their right to be located on school district-owned campuses) is mandated by state law.

“I think the biggest battles will probably be in Sacramento,” said Goldberg. “I’m sorry, but there needs to be some reform to charter legislation.”

No matter who wins the special election, the board will be pressing for more money, both from the State Legislature and from voters. One month after the runoff, in June, the district will ask voters to increase their own property taxes by 16 cents-a-square-foot, in order to raise half a billion dollars or so a year and save L.A. Unified from insolvency. The measure will need a 67-percent supermajority to pass, so it’s far from a sure thing. Should that vote fail, then the board’s business would become dominated by the money crunch. Should it succeed, then they may find themselves supervising fights over the spoils, between different unions and factions.

One parting thought: this special election is only to serve out the rest of Rodriguez’s term, which means, that’s right, whoever wins is up for reelection in 2020. Doubt there will be much going on in politics that year anyway.