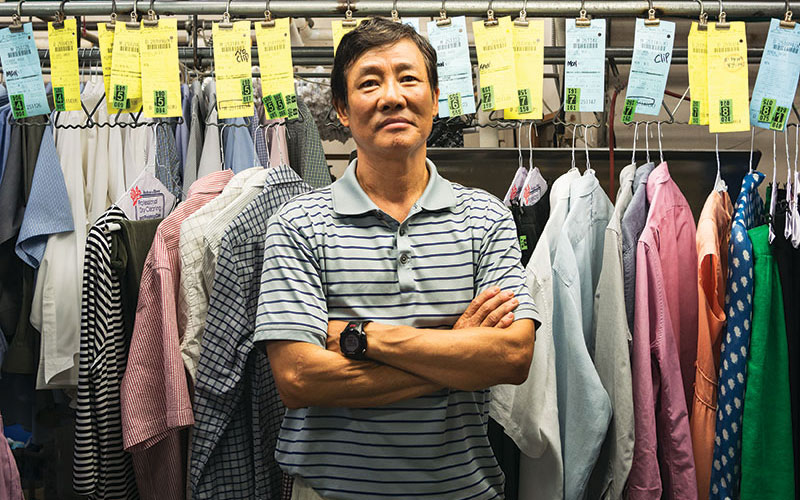 Starting over  in a foreign land—it’s tough and risky. To better their odds of thriving here, some people follow the path of those who came before them, carving out niche industries along the way.

Close to three-fourths of all dry cleaning businesses in Los Angeles are owned by Korean immigrants, according to the Korean Dry Cleaning Association of Southern California. Richard Nam is one of them. The proprietor of Clean ‘n’ Save in Silver Lake, Nam studied electrical engineering before coming to L.A. in the ’80s and working at a gas station. He opened a dry cleaner because of the regular hours and limited amount of English required. “Being an owner is so much pressure,” says Nam. “But if I work hard, I get richer.”

In the 1940s, Kanjibhai Desai left Gujarat, India, and bought a hotel in San Francisco. Among those who followed his lead were Amish Desai (no relation) and his wife, Rekha Patel, owners of Hermosa Beach’s Grandview Inn. “More than 70 percent of the hotel industry in the U.S. is owned by Indian people,” says Desai. What’s the appeal? “You don’t have to have a car or commute or pay for an apartment,” he says. “Sometimes it’s frustrating because you’re stuck 24/7, but sometimes you have to suffer to gain something.”

“I worked for the same lady for 12 years, four months, and two days,” says Sonia Agarpo-Segundo (standing beside client Susan Stevens), who became a caregiver after leaving the Philippines in 1995. “When she passed away last February, it was as if my mom passed away again.” Word-of-mouth has led tens of thousands of Filipinos to work in home health care. “I think it’s our culture,” says Delia Goggins, a Filipina nurse who, in 1980, opened one of the first home health care companies in Beverly Hills. “We take care of our elderly. We don’t put them in nursing homes.”

“My uncles were in the business. My dad’s friends were getting in the business,” says Danette Kuoch, whose parents, Peter and Sutthy, bought California Donuts in Koreatown in 1982 after emigrating from Cambodia. “It didn’t require too much English.” They were part of a wave inspired by Ted Ngoy, who fled war-torn Phnom Penh in 1975 and enrolled in the manager-training program at Winchell’s before buying a doughnut shop in La Habra. But if Ngoy is a pioneer, so is the Kuochs’ youngest daughter, Stephanie (pictured), who is helping redefine the confection with flavors like wasabi-ginger.