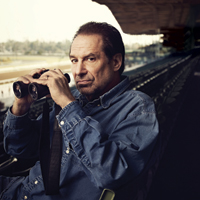 When writer David Milch and director Michael Mann set out to make their new HBO series, Luck, about the seedy, high-stakes world of horse racing, there was never a question about where it would be shot. “I’ve been to most of the tracks in Europe, and to me, Santa Anita is the most beautiful track in the world,” says Milch, a thoroughbred owner himself who loves how the Arcadia park “seems benign and pastoral but in fact it’s a jungle.” Mann had never been to Santa Anita until Milch took him, and he, too, was struck by the way the San Gabriel Mountains illuminate the stretch. That the series is partly about gamblers and degenerates only made the setting more perfect. “If this was My Friend Flicka or Secretariat, you would never shoot at Santa Anita,” says Mann. “It’s only because our people—and the language they use—are so not pretty that you’re able to get away with it.”

Had Grove developer Rick Caruso succeeded in building his proposed Shops at Santa Anita in the track’s parking lot, Milch and Mann’s mise-en-scène would have been dramatically different. The expansive family-oriented outdoor mall with a horse-drawn trolley wending its way past luxury retailers never materialized, leaving the 77-year-old Santa Anita (it’s on the National Register of Historic Places) in a state of degraded gentility. Of course that makes it a poignant stage for Luck’s hucksters and dreamers, portrayed by Dustin Hoffman, Nick Nolte, Dennis Farina, and seemingly every other craggy-faced actor in Hollywood. Milch, whose previous series include Deadwood (talk about craggy) and the short-lived John from Cincinnati, hopes cable watchers will thrill to Santa Anita as he does (racing season began the day after Christmas). “It’s a very arcane environment,” he says. “One enters at one’s peril.”

Mann agrees, sounding like a convert. “If it’s January at 6:30 in the morning,” he says, “and you’re out there and there’s snow on the mountains and the air is crystal clear, it’s fantastic.”