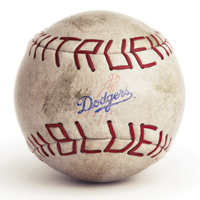 What a long, strange year it was for the Boys in Blue. First there was the gruesome attack on Giants fan Bryan Stow last spring. Then, as Frank and Jamie McCourt’s marital split wound its way through the legal system, came revelations of their over-the-top spending ($19 million for the house next door to their Malibu mansion as a place to do laundry? Really?).

Shake out those Dodger duds and head to Elysian Park, where you’ll find the house that survived the McCourts. It’s a new day

But even Job caught a break in the end, and Dodger fans weren’t without theirs. The Cy Young Award for pitcher Clayton Kershaw. A Golden Glove for outfielder Matt Kemp. And on April 10, as the Dodgers face the Pittsburgh Pirates in their 2012 home opener, yet another happy ending will be in play. For the first time since they were wed in 2004, catcher Matt Treanor and two-time beach volleyball gold medalist Misty May are living in the same city.

The couple had long commuted between her home in Long Beach and his in Florida, or Michigan, or Texas—wherever he happened to be competing for a major league baseball franchise. Traded in November to L.A., Treanor can now enjoy everyday domestic things like “sleeping in my own bed, taking care of the ordinary to-dos around the house and not having to find someone to do them for me.” He and May can frequent their favorite local hangouts, dropping in for breakfast at Schooner or Later or a chat with the convivial owners of Tracy’s Bar and Grill.

The Garden Grove-born athlete will also command a considerable cheering section that includes not only his famous wife but seven brothers and sisters and 12 nephews and nieces.

Treanor says there’s been locker room banter about the players pooling their funds to buy the team. “But no matter what’s going on with the business side,” he says, “the fans should know the guys will get out and bust their butts.”