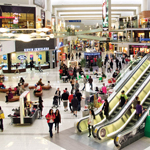 Century City’s shopping center, a high-end mélange that features Coach, Bloomingdale’s, Brooks Brothers, and Tiffany, is one of the most profitable malls in the nation, with each square foot of retail space generating nearly $1,000 in sales last year—almost double that of Fashion Square in Sherman Oaks. But there’s a problem: Century City is too small to accommodate the number of retailers wanting to get in. That means the loss of potential sales, jobs, customers, and local tax revenue as well as a loss of rental income for the owner of the property, Westfield Group. So later this year, having secured approvals from the City of Los Angeles and support from the area’s persnickety home owner associations, Westfield will begin work on a $500 million remake of the Century City mall by adding a second floor and more than doubling the number of shops. When completed in 2017, the project will have taken more than a decade from the time it was conceived.

You might recognize Westfield by the red-scripted logo that’s displayed atop each of its properties. But it’s also known as a preeminent fixer-upper of shopping centers, a big, messy process that requires huge amounts of capital, a coterie of lawyers and lobbyists, and most important, time. Westfield, you see, has a way of wearing everybody else down. “You know going in that they’ll get most everything they want,” says the head of a West L.A. neighborhood group, and it’s true. With Century City, the company agreed to construct an area for bicycle storage lockers and showers, and to lop off 10 stories from a planned 49-story hotel-condo tower. Those changes, however, still leave most of the blueprint intact. Even Grove developer Rick Caruso couldn’t keep pace, backing out of a 51-acre retail project that would have been located next to Arcadia’s Santa Anita Park—and near Westfield’s Santa Anita mall. Caruso and Westfield engaged in litigation and two contentious ballot measures. After a falling-out with his partner, Caruso finally said, Enough.

Westfield co-chief executive Peter Lowy joked during a speech last fall that of the 170 people in attendance, 30 or 40 were from Westfield and “the other 100 or so are from law firms—I think downtown—that we do business with.” For those looking to challenge the Australian-based company, it’s not so funny. Westfield is a real estate colossus, with 118 centers worldwide and assets valued at nearly $33 billion, not including works in progress like the retail portion of New York’s World Trade Center. Its local portfolio—much larger than that of the nation’s two top mall owners, Simon Property Group (Del Amo Fashion Center) and General Growth Properties (Glendale Galleria, Northridge Fashion Center)—covers 10.7 million square feet, which is roughly the equivalent of 34 L.A. Memorial Coliseums.

Of course mall owners must ultimately rely on their tenants to do well, and that’s where things become tricky. For the moment, customers are back, especially in the more affluent sections of town. Sales at Westfield’s ten Los Angeles locations have increased 7 percent over the past 12 months, to where they were at the end of 2007. But consumers aren’t behaving as they did before the recession. An obvious example is the preference for fashion-forward clothing on the cheap, which reflects a fundamental shift in the way people do their shopping. That explains why many boutiques are struggling, while low-cost chains like L.A.-based Forever 21 have become powerhouses. The use of comparison-pricing phone apps in particular places an emphasis on discounting, and retailers have tried to respond by offering markdowns, sometimes on an hourly basis.

The other change is in the makeup of shopping malls. Before the economy collapsed, U.S.-based retailers like the Gap or Victoria’s Secret had a business model that relied on opening new stores every year. After exhausting all potential locations, they would then spin off different concepts, like Baby Gap or Banana Republic, and open additional stores. But the downturn and the weak recovery have thrown off that approach (too many stores, not enough customers), forcing retailers to significantly downsize. This could have been a disaster for mall owners, except that something else was going on: Chain stores in other parts of the world were discovering the United States as a new market. All of a sudden Sweden’s H&M, Japan’s Uniqlo, and Spain’s Zara began filling the empty spaces. At the end of 2011, the vacancy rate for L.A.-area malls was 3 percent, down from 4.8 percent in early 2009.

Lowy loves talking about this stuff. He’s quite familiar with L.A., having lived here since 1990 as head of Westfield’s U.S. operations (he and his wife own a seven-bedroom, nine-bathroom home in Beverly Hills). Sitting in a conference room at Westfield’s headquarters in West L.A., Lowy notes that the company has spent $1.2 billion during the past five years overhauling, expanding, and redoing L.A. properties. The most ambitious of the rehabs so far is Culver City, which Westfield purchased in 1998 when it was called Fox Hills Mall. Plagued for years by gang-related incidents, the place became run-down and empty—a “forgotten mall,” as one real estate broker put it. Completed in 2009 and renamed Westfield Culver City, the complex is 45 percent larger than it was during the Fox Hills days—with the additions of a Target and a Best Buy—and last year sales totaled $116 million, an 11 percent increase from 2010. The difference is striking, not just in the number of shoppers but in the towering movie ads, glass-and-steel exterior, and eye-catching storefronts. Violent crime is also down.

One floor below Lowy’s office is a large room jammed with renderings and blueprints of future mall renovations throughout the United States. Scattered along the wall are samples of flooring; off to another side are chairs and garbage cans being considered for the food courts. Cost-consciousness is a priority; the company recently announced plans to reduce its debt load by selling eight of its properties, including Eastland Mall in West Covina. The company also emphasizes aesthetics, particularly in affluent locations. When the Century City food court was being gussied up in 2007 (real flatware was one of the improvements), somebody noticed that diners sitting on the outdoor terrace would be staring at air-conditioning units on the roof of an adjacent building. The solution was to install bannerlike movie advertisements to shield the view—and generate extra revenue. “What Westfield tries to do is create communities,” says Lewis Feldman, a partner in the Los Angeles law firm Goodwin Procter who has worked on Westfield projects. “That’s one of the things an online experience will not give you. People still want to go to the movies, and they still want to eat. There’s a social aspect to it.”

estfield started as an Australian success story: Two partners, Frank Lowy and John Saunders, opened a delicatessen in 1955 opposite the railway station in Blacktown, a Sydney suburb, that they figured would attract Europeans immigrating to Australia after World War II. Later, as tracts began filling up in the outlying western communities, the pair switched to land development. By 1960, Westfield was a publicly held company, leading to the construction of dozens of centers throughout the country. The United States, with its growing suburban population and consumer mind-set, would be the next major target.

Among early locations that Frank Lowy had his eye on was a stretch along Pico Boulevard in West Los Angeles—at the time occupied by a freestanding May Company, a Vons supermarket, and a minimall. The land for what would become the Westside Pavilion was purchased in 1983 for $8 million, but the coup was in persuading Nordstrom executives to open a store in the enclosed three-story complex (the retailer had been reluctant to expand outside of its base in Washington state). Residents were concerned about congestion, and Zev Yaroslavsky, then an L.A. city council member, called it “without doubt the worst case of commercial overdevelopment in my district.” Apparently nobody told the shoppers, who showed up in huge numbers.

The industry hit its stride around this time, with 16,000 malls built between 1980 and 1990. Then there was the savings-and-loan meltdown, a recession, and consolidation within the industry. “In 1993, you had 20 major owners of malls; in 2005, you had 5,” says Peter Lowy, who is Frank’s son. Lowy and his brother took charge of day-to-day operations in 2011: “We bought some, they bought some, companies merged.” As part of the deal making, Westfield unloaded the Westside Pavilion in 1996 while it acquired stakes in Century City and Valencia Town Center. And unlike its competitors, the company started to brand its holdings, as in Westfield West Covina and San Diego’s Westfield Horton Plaza. The idea, first introduced in Australia, was for shoppers to connect with the standard features of a Westfield property. “Every marketing expert told us it was stupid, that we come from Australia and we don’t know what we’re doing,” Lowy says. But branding its malls creates an identity that goes well beyond a single property.

Lowy himself is a familiar name at City Hall and within L.A.’s business and civic communities (he served as chairman of the University of Judaism and has been on the board of numerous nonprofits). Politics is also part of the picture: Lowy has given tens of thousands of dollars in campaign contributions to local elected officials, though he insists, rather implausibly, that such giving “doesn’t help at all to get any approvals.” One area where the family fortune—estimated by Forbes at $4.4 billion—has caused problems is a long-running investigation by Australian and American officials over possible tax evasion. In 2008, a U.S. Senate subcommittee report uncovered information suggesting that the Lowys used an offshore bank to set up a foundation in Liechtenstein and then funneled money back to the family through a separate corporation. During a subcommittee hearing, Lowy refused to comment on the investigation, and he wouldn’t discuss the case with me, either.

The thing to know about Westfield, beyond all the money, is the single-mindedness. Lowy believes that urban areas offer the best potential for development and that the best urban areas are both densely populated and located near transportation hubs. Busier is better. This is not a new concept in other parts of the world, but in sprawling and congested Southern California, busier isn’t that inviting a prospect, especially for the people who have to live with it. When the company first proposed the Village, a 1.4-million-square-foot mixed-use project in Woodland Hills, residents were furious. They had been putting up with congestion from Westfield’s two nearby malls—Westfield Topanga and the Promenade—and were now faced with still more stores, anchored by a Costco that would attract shoppers from other parts of the San Fernando Valley.

It took seven years of hearings and environmental impact statements before the L.A. city council finally signed off on the deal in February. As it had with Century City, Westfield made a few accommodations, including a redesign that will feature bike paths and greenery. The Costco will have a brighter facade than a typical big-box store, and its gas station will be redesigned to hide the pumps from street view. “I know there were…a lot of issues,” said City Councilman Dennis Zine during a council hearing, “but at the end of the day this will bring a tremendous amount of opportunity.” Well, it’s not quite the end: Despite council approval, the Woodland Hills Homeowners Organization has gone to court over the project, accusing the company of violating statutes concerning car use and the environment. At Westfield it’s always something. But with lawyers, money, and all the time in the world, the outcome is rarely in doubt.