Home Uncategorized It Happened This Week in L.A. History: The Watts Riots 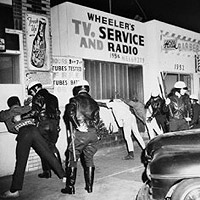 A traffic misdemeanor evolves into one of the most severe riots in L.A. history.  Marquette Frye, a 21-year-old African-American, was pulled over and arrested by white officer Lee Minkus under the suspicion of driving drunk. Tensions between onlookers and police resulted in a violent outburst at the scene. Frye’s arrest incited a rebellion in Watts, a poverty-stricken, predominantly African-American neighborhood in South Central L.A.

The Watts Riots ran up a tab of $40 million dollars in property damage, making it one of the largest and most expensive urban uprisings of the Civil Rights era. Over the course of six days, 14,000 National Guard troops moved into South L.A. and cordoned off nearly 46 miles of the area in an effort to maintain order. Thirty-four people were killed, more than 1,000 were injured, and almost 4,000 were arrested before the National Guard was able to regain control on August 16.