Home Uncategorized It Happened This Week in L.A. History: The Red Scare Comes To... 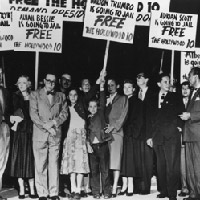 Acting on behalf of the U.S. Congress, the House Un-American Activities Committee (HUAC) began investigating the movie industry for communist sympathizers. Studio heavyweights including Walt Disney, Jack Warner, and Ronald Reagan, then president of the Screen Actors Guild, claimed there were communist influences in the industry following a slew of union strikes affiliated with the American Communist Party. HUAC began compiling a list of “suspects” that eventually totaled 43. Of those, 11 were subpoenaed to appear before HUAC. Upon being asked whether they were or had even been affiliated with the Communist Party, only one answered the question. The remaining 10, dubbed the Hollywood Ten, refused under their first amendment rights, though most were or had been associated with the Communist Party.

The group, which included screenwriters and directors, were found in contempt of Congress and served jail time. Afraid of audience backlash, studio producers issued the Waldorf Statement, which blacklisted the Hollywood Ten, barring them from employment until they swore there was no allegiance with the Communist Party.

Actors including Humphrey Bogart, Gene Kelly, Lucille Ball, and Lauren Bacall retaliated, forming the Committee for the First Amendment in protest of the investigations.