Home Uncategorized It Happened This Week in L.A. History: The Lakers Land a Legend 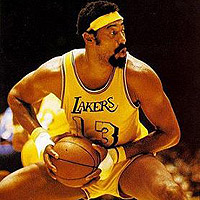 The Philadelphia 76ers trade Wilt Chamberlain to the Los Angeles Lakers. Chamberlain, a demigod in the basketball world, attained legend-status when he scored 100 points for the Philadelphia Warriors in a single game (against the New York Knicks in 1962).

Chamberlain was traded to Los Angeles when he asked for a pay raise the 76ers weren’t willing to give him—a move which proved to be exceedingly foolish on their part. During Chamberlain’s four seasons in Los Angeles, he led the Lakers to the NBA Finals three times and to a championship win in 1972. The following year, the 76ers went on to play the worst season in NBA history, ending with a pathetic record of 9-73.