Home Uncategorized It Happened This Week in L.A. History: The Godfather of Pulp Fiction... 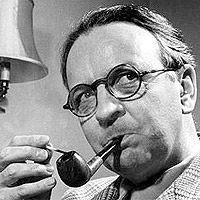 Raymond Chandler is born. At 44 years old, the man who redefined detective fiction lost his job as a bookkeeper and auditor at Los Angeles’ Dabney Oil syndicate and decided to pursue a career in writing. Though he spent the majority of his childhood in Nebraska and then the UK, Chandler quickly became a son of L.A., embracing the city in a way that few authors have (especially for a transplant). Five of his seven published novels take place in Los Angeles neighborhoods, including Hollywood and Santa Monica (which he refers to as “Bay City”).

Chandler also forayed into screenwriting, co-writing the script for Double Indemnity with Billy Wilder in 1944. Though he penned several successful adaptations, his only original script was the 1946 noir film The Blue Dhalia, which was nominated for the Academy Award for Best Writing (Original Screenplay).