Home Uncategorized It Happened This Week in L.A. History: The Games of the X... 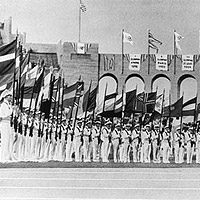 The tenth Olympic games begin in Los Angeles. As a result of the worldwide Great Depression, no other city rose to the challenge of hosting this enormous event, meaning L.A. took one for the team both literally and figuratively.

The X Olympic games saw the construction of the first Olympic Village in Baldwin Hills, which hosted 1,281 male athletes from 37 countries. (127 female athletes stayed at the Chapman Park Hotel on Wilshire Boulevard.) This year marked the first Olympics in which electronic timing and photo-finishes were  introduced, as well as the now-commonplace tradition of having the gold, silver, and bronze medalists stand on podiums as the winner’s national anthem is played.

Though this year’s Olympics are being held in London, L.A. will still be represented: View our slideshow of seven local 2012 Olympic hopefuls here.