Home Uncategorized It Happened This Week in L.A. History: The 99% Take to... 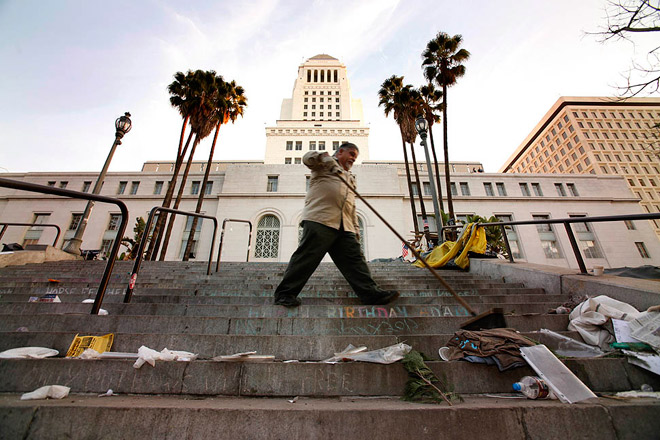 Angelenos took to the streets of L.A. protesting the Wall Street bailouts in what was designated as the National Day of Action by the social movement Occupy L.A. The protesters began gathering at 7 a.m. and shut down the financial district, marching from Bank of America Plaza through Wells Fargo Center Plaza in downtown L.A.

The movement included several hundred Occupy L.A. activists alongside the Good Jobs L.A. organization members, and union workers. Some blocked the intersection on 4th and Figueroa Street, building three tents with signs reading “We are the 99 Percent.” Over thirty officers patrolled the site with orders for the crowd to disassemble. 70 protesters were arrested.

The Occupy L.A. movement had officially begun October 1 when hundreds of protesters settled in at City Hall. After two months the campsites were cleared out around midnight on November 30 with over 250 arrests.