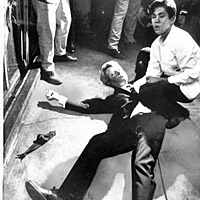 Robert F. Kennedy was assassinated just after midnight in the kitchen of the Ambassador Hotel. The young senator, who clinched the California Democratic presidential primary only hours before, was killed by Palestinian nationalist Sirhan Sirhan.

During the investigation into the murder, a search of Sirhan’s home yielded a diary in which he wrote, “My determination to eliminate RFK is becoming more and more of an unshakable obsession. RFK must die. RFK must be killed….Robert F. Kennedy must be assassinated before 5 June 68.” It is often suggested that the date was significant to Sirhan because it marked the one year anniversary of the Six Day War, and he held strong anti-Zionist beliefs whereas Kennedy was a political supporter of Israel.