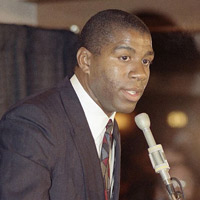 Los Angeles Laker Earvin “Magic” Johnson holds a press conference to announce he is HIV positive and retiring from basketball. The 32-year-old had played for 12 seasons in the NBA and in five NBA championships.  The announcement came as a shock to fans and the community alike at a time when very little was known about the HIV virus. Johnson stated that he did not have the AIDS disease and, more than 20 years later, he still doesn’t.

Johnson was diagnosed after a routine physical exam for a life insurance policy and attributed the virus to unsafe sex with multiple partners.  His wife, who was pregnant at the time, tested HIV-negative, as did their baby.  Johnson vowed to become an advocate for HIV awareness and began the Magic Johnson Foundation. November 7 is “Point Forward Day,” named after Johnson’s roles as forward and point guard for the Lakers, and aims to educate individuals about HIV.

Johnson later returned to play in the All-Star game at the end of the season and won the MVP award. He hoped to return to the Lakers but was initially denied a spot on the team due to opposition from NBA players who feared potentially contracting the disease. All that changed in 1996 when, at 37, Johnson rejoined the Lakers for 44 games. He officially retired from the sport shortly thereafter.