Home Uncategorized It Happened This Week in L.A. History: “Levitated Mass” Takes Over the... 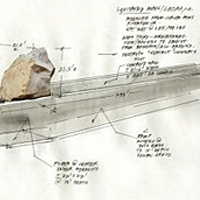 Following months of media attention, Michael Heizer’s exhibition, Levitated Mass, opens at LACMA. The project is a behemoth, both literally and figuratively: it consists of a 340-ton boulder suspended above a 456-foot-long concrete slot. Once it opens to the public, patrons will be able to walk through the slot and underneath the boulder, perpetuating the idea of the negative form.

Originally conceived in 1968, the piece was put on hold until Heizer could find an appropriately sized monolith, which only occurred decades later in Riverside County, California. The idea of the artwork may sound intimidating, but if you’re prepared to brave all in the name of art, the exhibition will be running indefinitely—you may even be able to catch it for free this week.