Home Uncategorized It Happened This Week in L.A. History: Humphrey Bogart Gets His Hands... 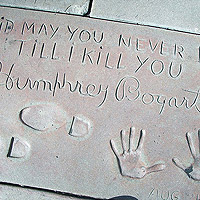 Humphrey Bogart’s casts his hands and feet in the cement outside of Grauman’s Chinese Theatre. Bogart is most well known for his role as ex-pat Rick Blaine in 1943’s Casablanca, which won an Academy Award for Best Picture.  The Oscar win catapulted Bogart from fourth to first place in Warner Bros.’ roster of leading men, resulting in a $460,000 pay day (enough to make him the highest paid actor in the world at the time).

Bogart’s cement slab is inscribed with the words SID MAY YOU NEVER DIE TILL I KILL YOU, a not-so-cryptic homage to the theater’s namesake, Mr. Sid Grauman himself.  Though he only ever won one Oscar (Best Actor in 1951’s The African Queen), The American Film Institute named Bogart the greatest male star in American cinema on their annual “100 years…” series.