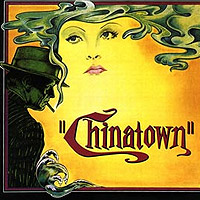 Roman Polanski’s Chinatown is released. The film, which stars Jack Nicholson, Faye Dunaway, and John Huston, is set in 1937 Los Angeles at the height of the California Water Wars—a period in which the rapidly growing city diverted water from the Owens Valley through what has often been described as “political subterfuge.”

Polanski’s neo-noir masterpiece is widely regarded as one of the greatest films ever made. It holds the number two spot on the American Film Institute’s list of Best Mystery Films and won four Golden Globe awards and the Oscar for Best Original Screenplay (in all, the film was nominated for eleven Academy Awards). Due to its cultural and historical significance, Chinatown has been preserved in the National Film Registry.