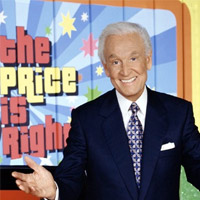 Bob Barker’s last episode of The Price is Right airs. The silver fox had been hosting the show since 1972 and retired in his 50th year on television, despite protests from fans (including yours truly—I watched the show as a child, eagerly awaiting the day I would follow in my mother’s footsteps and be called on down. Alas, Bob retired before I moved to California.)

The Price is Right hosted by Bill Cullen debuted in 1956 and aired until 1965. Barker spearheaded its 40-year-long revival, making it the longest-running game show in North America.