Home Uncategorized It Happened This Week in L.A. History: Black and White and Read... 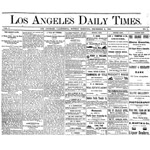 The first edition of the Los Angeles Daily Times (now the Los Angeles Times) is published by Thomas Gardiner and Nathan Cole, Jr. After enduring some financial woes in its first year, the paper, which had its office in a small brick building located at New High and Temple downtown, was inherited by Mirror Printing Office and Book Bindery.  Harrison Gray Otis assumed editorial responsibilities shortly thereafter.

Otis, credited with turning The Times into a success, managed the paper till his death in 1917, when his son-in-law ,Harry Chandler, took over. The Chandler family, prominent figures in L.A. society and the source behind the Dorothy Chandler Pavilion, owned the paper until 2007. The Times Mirror Co., owned by the Chandlers, merged with the Tribune Co. in 2000. The family then sold its share of the company in 2007 to businessman Sam Zell.

Since its inception, The Times has won 41 Pulitzer Prizes, including its first (of six) Gold Medal for Public Service in 1942 for its campaign for the constitutional right of free press.  In 1947 it became the largest-circulating paper in Los Angeles and remains one of the largest metropolitan publications in the country today.  The Times launched their award-winning web site in 1996 and has consolidated their Web and print operations since 2007.