Home Uncategorized It Happened This Week in L.A. History: An Attempt to Clear the... 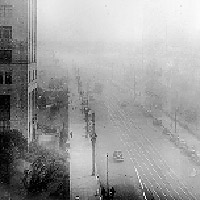 The L.A. County Board of Supervisors created the nation’s first Smoke and Fumes Commission to work on the problem of smog, which had been plaguing the city for years (the Los Angeles Times reported visibility had been cut to three blocks in 1943). Per the recommendation of the commission, emissions of dense smoke were banned.

By regulating garbage burning in dumps and reducing smoke and sulfur oxide emissions caused by oil refineries, area smog was reduced by two-thirds by the early 1950s. In addition, backyard incinerators were banned in 1958. The ongoing urbanization of L.A. however, led to an increase in the number of gas-emitting vehicles on our roads, offsetting anti-pollution efforts.

In order to reduce hydrocarbon emission from gas tanks, officials required sleeves be used on gas pump nozzles to keep the emissions at bay. Gas nozzles are now certified in capturing 95 percent of fumes. Two other major advents utilized to fight smog were later established: the catalytic converter and the SmogCheck program.