Home Uncategorized It Happened This Week in L.A. History: A Transcontinental Journey Begins 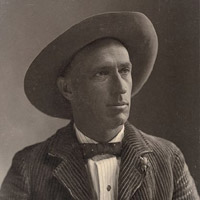 After accepting a job with The Los Angeles Times, Charles F. Lummis sets out to walk to Los Angeles from Cincinnati. The trek, which he completed on February 1, 1885, spanned 3,507 miles, lasted 143 days, and was not drama free: While hunting in Arizona, Lummis fell off a ledge and broke his arm. After creating a sling for himself, he walked the remaining 700 miles.

During his journey, Lummis dispatched stories to Times publisher General Harrison Gray Otis on a weekly basis and eventually wrote a book, Tramp Across the Continent, about his experience. Following his tenure at the Times, Lummis become editor of Land of Sunshine (later renamed Out West) and a librarian for the Los Angeles Public Library.

Lummis is also credited as one of the founders of Landmark’s Club and opened the Southwest Museum, using his photography and art collection as the foundation for displays, in 1907.  His home, El Alisal, is now the headquarters for the Historical Society of Southern California.