Home Uncategorized It Happened This Week 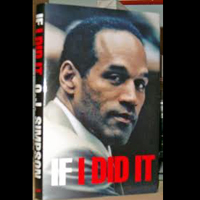 Regan Books announced plans to publish If I Did It by O.J Simpson, a book in which the ex footballer and double homicide suspect reportedly addressed how he could have killed Nicole Brown Simpson and Ronald Goldman, just two weeks before this scheduled release date. The project was cancelled amid public outrage, although 400,000 copies were printed. The rights to the book were later granted to the Goldman family.