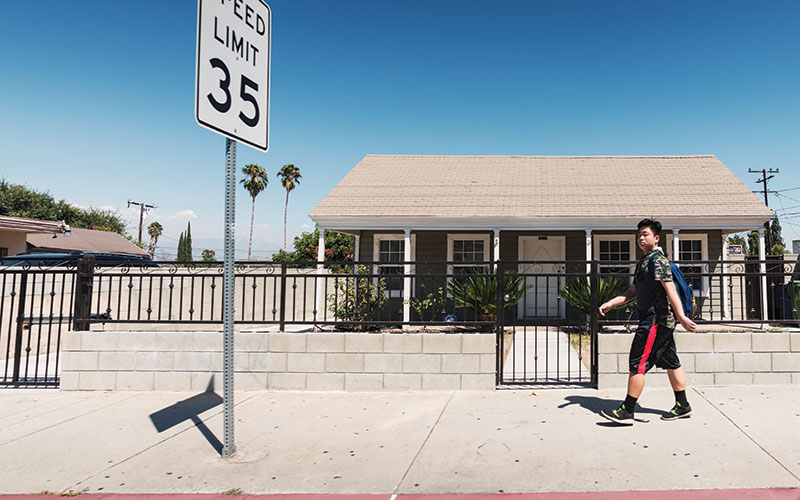 I was born in Tijuana, in an unnamed colonia atop a muddy hillside above the city. After my siblings and I received our green cards, we crossed the border with  our mother into Southern California. I was raised in La Puente, which borders the City of Industry, a place known for its many warehouses and factories. As kids, my friends and I played in empty fields sandwiched between loading docks owned by multi-million-dollar companies. Our fathers disappeared into the cavernous bellies of these plants. They came home exhausted, kicked off their work boots, cracked open beers, and told stories about feuds along the assembly line, about angry machines that ripped off fingers and arms, about chemicals that could melt skin away, about broken spines and permanent hearing loss. We were a community of immigrants from Mexico, Guatemala, and El Salvador. We arrived seeking shelter from poverty and civil unrest and instead found ourselves confronting a society that had all but abandoned the mythical American dream.

In high school I got a job at the Puente Hills Mall. It was near the more affluent communities of Hacienda Heights, Walnut, and Rowland Heights. These were neighborhoods with stucco houses, wide patios, and well-manicured lawns. One morning after a staff meeting, a fellow employee, Brian, needed a ride home. He was a senior in high school. He was tall and thin with clear blue eyes and bright blond hair. He lived in one of those beautiful gated communities, perched high up on a hill overlooking the San Gabriel Valley. There were trimmed hedges, and topiary swans and flamingos decorated the walkways. There were no bars on the windows of these homes, no graffiti-tagged fences or buildings. And there were certainly no factories. Up until that moment I thought that houses and places like this existed only on television. I didn’t think they were real, but then there they were right in front of me.

RELATED: Finding a Home and a Muse in L.A.

After decades away, I recently moved back to the San Gabriel Valley and have spent much of my time getting reacquainted with the streets and neighborhoods I once knew. In La Puente and the City of Industry there are still the same taquerías, still the same-looking men in work shirts, standing in line at the liquor store, cashing their checks and buying lottery tickets.

But cities like Rowland Heights and Walnut, cities like those Brian and his family called home, are now dotted with ramen and boba restaurants. Billboards and fliers posted on telephone poles are written in Chinese. At the Puente Hills Mall, shops catering  to this demographic have replaced the chain stores I remember. In the parking lot I look on as Korean and Filipino boys pull up in cars with custom rims and tinted windows. They blast rap music and sport baggy cords and oversize T-shirts, and they look like younger versions of my brothers and their friends when they were gang members back in the day. This cultural exchange between different groups of immigrants has been going on for decades, I realize, as I watch these roaming clusters of young men with their neatly ironed football jerseys and slicked-back hair glistening with pomade. Long before there was such a term as fusion cuisine, we were experimenting and borrowing more than just culinary ingredients from one another. I marvel at our efficiency, at our ability to adapt and assume, to assimilate without losing any part of ourselves.

I am left wondering what happened to families like Brian’s, families with mothers and fathers who were doctors and teachers. Are they living next  to this new group of immigrants, the minorities among the newly arrived? I think about the migratory patterns of birds and then remember a story my parents once told me. Years before I was born, my father had crossed the border illegally and made his way to Chicago to meet up with an uncle already living there. My father’s journey was long, and he talked about a frozen lake where a bird lay trapped just beneath a layer of ice so clear that he could trace the latticework on the plumes of each of its feathers. We’re not frozen in lakes of ice, though. We move and flow and change, always on the brink of becoming something else, something other than what we think we are.

Alex Espinoza is the author of Still Water Saints and The Five Acts of Diego León. He is a professor and director of the MFA Program in Creative Writing and Literary Arts at Cal State L.A.