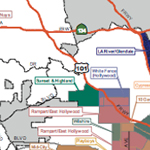 Los Angeles is the gang capital of the United States. It’s also the first city to introduce controversial antigang tactic: the gang injunction.

The gang injunction—a civil suit filed by law enforcement requesting a special set of prohibitions for gang members (associating with one another in public, for example)—came into existence on July 22, 1982, when the Los Angeles city attorney and the Los Angeles Police Department obtained a temporary restraining order against three gangs: Dogtown, Primera, and 62nd Street East Coast Crips.

In previous years, according to Matthew D. O’Deane’s book Gang Injunctions and Abatement, Los Angeles gangs had been the targets of situs abatements, lawsuits that held people accountable for illegal activity occurring on the property they owned and focused on known drug dealing locations. These situs abatements are considered precursors to the gang injunction; July 22, 1982, was the first time a gang had been sued as an unincorporated association. The first injunction was relatively benign, focusing on gang graffiti.

In 1987, the city attorney and the LAPD obtained a more extensive gang injunction against the Playboy Gangster Crips. The suit was the first to attempt to prohibit gang members from wearing gang clothing and associating with one another. The boundaries of the injunction were broadly defined as anywhere within the City of Los Angeles. The American Civil Liberties Union challenged the injunction, which led a judge to reduce its scope to a few blocks and strike certain controversial prohibitions.

Since 1982, use of the legal tactic has spread to other parts of the country. The scope of individual gang injunctions expands and contracts with every legal battle, but on the whole they have grown.

Today there are more than 44 permanent gang injunctions in Los Angeles placed on 72 gangs. Some of the injunctions prohibit known gang members from traveling in vehicles together, standing together, or even possessing cell phones  (certain exceptions apply) inside of the judge-approved areas mapped out by the LAPD or city attorney.

This map, published on the Los Angeles Police Department Web site, depicts all of the areas currently approved for gang injunctions. The targeted gangs are sometimes noted, but often a selected area includes several groups. A list of individual gangs and their injunctions is available here.