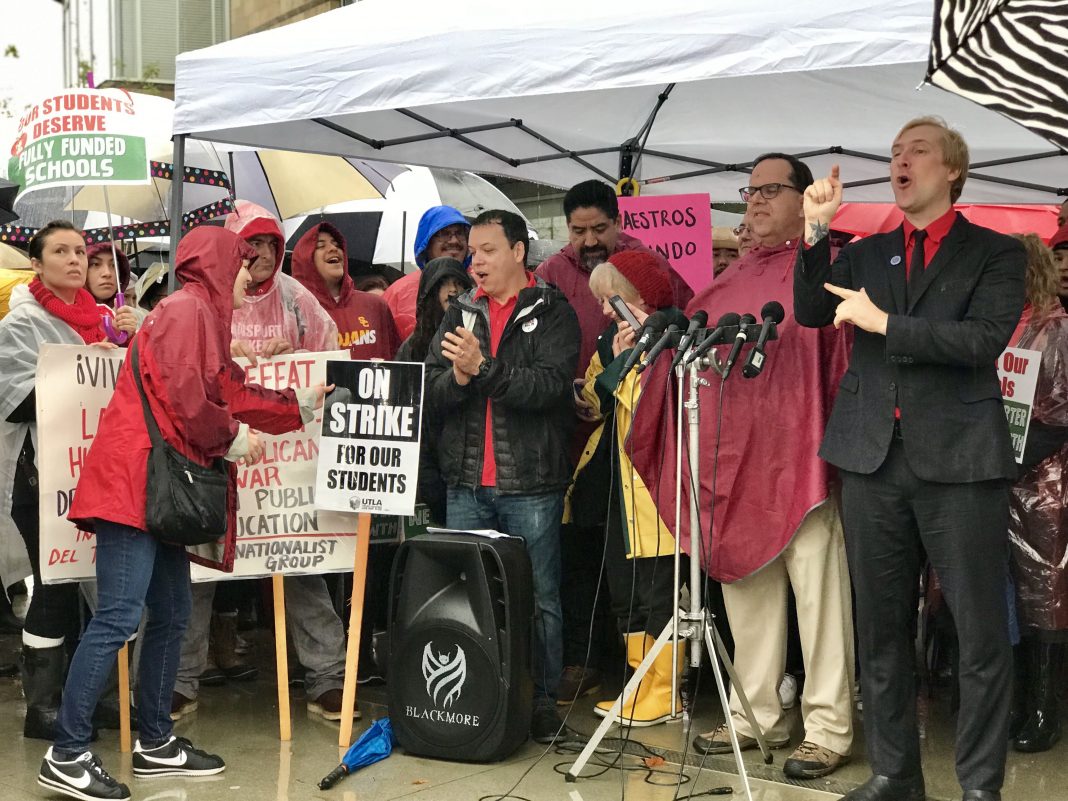 On the fourth day of the L.A. teachers strike, a crowd of about 100 students, UTLA members, teachers, and parents, rallied at Arleta at 7:30 a.m. for a news conference. Supporters from neighboring schools like Beachy and O’Melveny were also there.

Students, educators, and the president of the L.A.’s teachers union took the mic to repeat the reasons they continue to strike–rain or shine–and the concerns that they hope are addressed in the coming days.

History teacher Hector Perez-Roman, who has been teaching for over 15 years, hasn’t let the rain put a damper on his energy to keep striking for “what we know is right, for public education.”

“We’re fighting for the things we need in our schools and inside of our classrooms as well as outside of our classrooms because students have a lot of needs. If their needs are not met mentally or emotionally, then they can’t learn,” Perez-Roman said. Earlier in the morning, during the first portion of UTLA’s news conference, he recalled times he had to use money out of his own pocket to pay for simple supplies like tissues or bandages for his students.

Perez-Roman also said, “We all want to be in the classroom, that’s our number one priority, but we’ve come too far to just let up [on] too many concessions. … We’ve been striking for four days, but we’ve been bargaining for over 20 months, and it might not be likely that we’ll reach an agreement tomorrow. But obviously we have an open mind, but if that means going into next week, then let it be. At least we know that when we step back into our schools and classrooms, it’s going to be for the better for years to come.”

It's a wet morning at Arleta High School for day 4 of the teacher's strike. Big overnight developments: LAUSD and UTLA have agreed to to meet today. Meanwhile, cars are honking and the protest continues. pic.twitter.com/6UbpIzGFH1

Students who spoke during the rally also voiced concern over large class sizes, and about the lack of academic and psychological counseling.

“Class sizes are too big, my teachers are often overwhelmed and sometimes us students don’t get the attention we need,” said Marleny Ramos, a sophomore at Arleta High.

Beside the issue of class size, she also stressed the importance of counselors because “middle schoolers and high schoolers are in a stage in life when they need extra support when it comes to mental health.”

Justin Polk, a music teacher at Arleta, has been at the LAUSD for just a year but feels strongly about standing in solidarity with fellow teachers.

“I came from Louisiana, which is one of the states that has been heavily affected by charter schools, and having seen that firsthand and coming here to L.A., where you have the second-largest school district in America, it’s important to stand up and set an example for the rest of the country,” Polk said. “There’s strengths in numbers; there’s solidarity in numbers.”

When Caputo-Pearl took the mic, he mentioned to the crowd that Wednesday, January 16, the president of the Associated Administrators of Los Angeles wrote a letter to LAUSD Superintendent Austin Beutner. “It’s a long letter so I’m not going to tell you everything that was in it, but the punch line of that letter was that principals are sick of [the strike], vice principals are sick of it; if Beutner can’t get to an agreement that makes sense, he should just go and shut the schools down.”

After a long day Thursday, negotiations between the district and the union are set to resume this morning, and a big rally is in full swing in Grand Park. The Los Angeles Times reports that there are signs that a deal could be struck sooner than later, but the union won’t back down, even if it means another week on the picket lines.

“We can’t show one iota of relenting,” Caputo-Pearl said.

RELATED: A Woman Was Caught on Camera Shouting “Build the Wall” at Striking Teachers

Measure EE, the School-Funding Parcel Tax, Goes Down in Flames