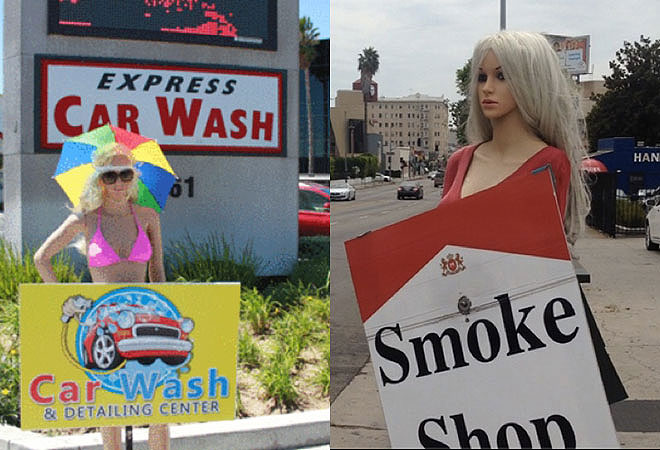 “Sorry I’m late,” says It’s Tax Time. “Somehow, my boss kept me at work after dark because he forgot I was outside until 9 p.m. He finally dollied me in after he noticed I was still on the sidewalk, spinning, as he walked down Sunset Boulevard to his car. I missed my bus and had to Uber over here. It took me three tries to get a car—I guess drivers aren’t into girls with signs.”

She exhales loudly, jerking her head to toss her dirty, plastic hair. “It’s hard being a robot sign spinner in Los Angeles.”

Smoke Shop nods, slightly. “You need a drink, like yesterday,” she says.

Cheap Dog Food! twists her permanently extended furry arm toward the bartender. “Hey! Can you get this girl a drink? It’s been a long day out on the streets, man.”

“YOU’RE TELLING ME,” CAR WASH yells, “I MEAN, WE’RE IN THE MIDDLE OF A DROUGHT AND I’M STILL OUT THERE ON WEST 3RD STREET WAVING MY SIGN.”

It’s Tax Time scoffs. “Don’t even start, Car. No one cares about taxes for three quarters of the year, and yet I’ve been stationed in front of a mailbox on Sunset and Douglas for eight months. Also, you don’t need to yell just because your sign is in all caps.”

“Oh!” Smoke Shop says. “That man I told you about was on my corner again.” She leans stiffly into her drink, placing her flat lips against a straw.

“Ugh,” Cheap Dog Food! whines. “Auto Man is soooo sexy. He used to be on my corner of La Brea at the old body shop next to Doggie Goddess. You never see male automatons—especially ones without a head.”

“You don’t stand a chance with him, Dog,” It’s Tax Time smiles. “You wear a dog costume. No one even knows you’re a woman!”

“GEEZ, TELL US HOW YOU REALLY FEEL, DOG,” CAR WASH says. “ALSO, MOST MALE AUTOS ARE SUPER VAPID AND ALL ABOUT THEIR BODIES. DO YOU REALLY WANT THAT?”

“You’re acting as if a gear head who is into his body is a bad thing—but that’s so L.A.!” Dog squeals. “Anyway, I’m content just thinking about him. Hey Smoke, what was this spinner guy you were talking about doing?”

“He was throwing his sign and dancing into traffic on Western,” Smoke Shop says. “I just stood there, watching him. He was advertising for some new place called ‘Vape Place.’ Can you believe that? Vape Place.”

“EW.” CAR WASH says, pushing her face into her straw. “THAT’S SUCH A CLICHE.”

“And awkward,” Tax Time follows. “I never see any spinners on my block. I’ve scared them all away.”

“Right?” says Smoke Shop. “I thought we out-priced them, leaving them to advertise new apartment complexes. Everyone knows we’re cheaper and weirder to work with. But Vape Place walks from Maplewood to Rosewood on Western, going in and out of traffic to get people’s attention. I even watched him walk onto a few buses with his sign!”

“Are you worried he’s going to knock you off your base?” asks Tax.

Smoke Shop shakes her head: “Not at all! I mean, some days my boss pulls my shirt down so that I flash drivers as they pass when I wave my sign low enough. That always gets a few customers inside. Can’t do that with a flesh sign spinner. At least not legally.”

The group bends their necks to nod in unison.

CAR WASH nudges her drink, offering a toast: “TO BEING A MECHANICAL SIGN SPINNER IN L.A.!”