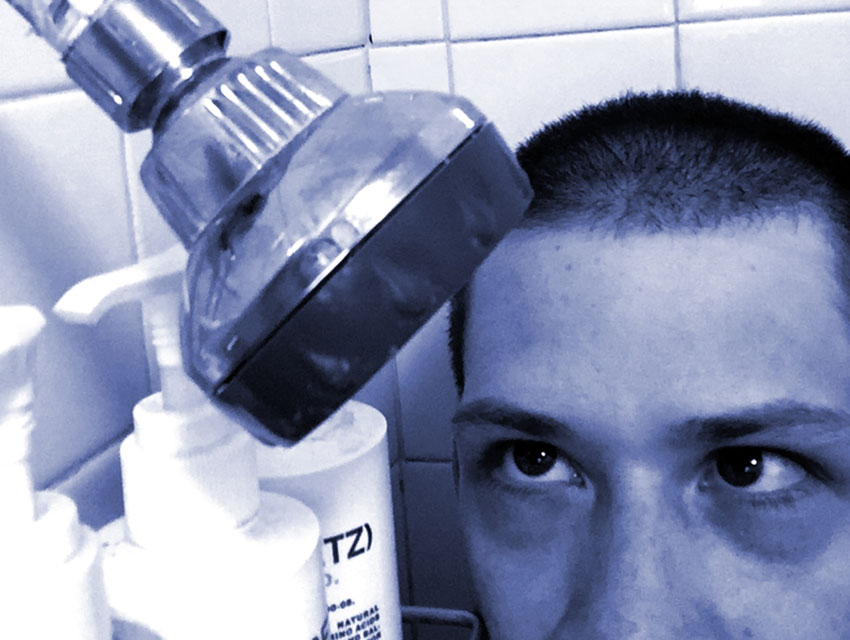 With a severe drought and an easily disappointed new city mascot to worry about, we’re all under pressure to cut back on using water. Local officials are urging Angelenos to keep showers to five minutes, tops. But should we go even further? Should we rinse off just once a week?

After reading “Could Droughts End the Daily Shower?” I began wondering how often one needs to shower in LA. Out of habit (and courteousness to other Angelenos), I’ve long showered once a day, before going into the office. But was a daily douse really necessary? I figured probably not—that is, unless I’m a bit shvitzed from a workout or commute. I decided to go all in by staying out of the shower for a full seven days.

Last Friday morning I had a celebratory wash to kick things off, an opening ceremony only John Waters could appreciate. I then marched to the bus for my ride to work, where I promptly announced that I would not be showering for a week. Some people looked confused. One person laughed. Most just seemed unfazed. “This should be easy,” I said to myself. “If they don’t care, I don’t either.”

On Saturday, I had multiple birthday gatherings to attend, which had me worried over my inability to freshen up. The first, a brunch, was a breeze—although I was unusually sleepy for the meal. The second, a dinner followed by a party, was surprisingly more subdued. When I broke the news to my friends as we mingled, they laughed. Some admitted that it didn’t take a drought for them to skip a shower. “Baby wipes and baby powder,” one remarked. “If you have those, you almost never need to shower.” I made a mental note to stock up.

I filled Sunday with chores, like getting my bike repaired, which was my way of challenging myself to get dirty and deal with it. I did some my minor maintenance and managed to come out clean-handed, then walked my bike a mile away to a shop on West 3rd Street in the afternoon heat. I didn’t generate any pronounced scents as a result, but I did accidentally cut an ankle on the trip. After quickly cleansing my battle wound in the sink, I went back to being generally nonplussed about not being able to hop into the shower to cool off.

Stress set in, at last, on Monday morning. With the heat’s return and my long walk to the bus in mind, I was sure disaster loomed. But—cue the anticlimax music—nothing disastrous happened. Spot bathing with a soapy washcloth and fancy wipes (like this or this), kept me somehow feeling clean. Plus, I found myself having fun playing a little game I invented called Try Not To Get Dirty. I walked down East La Brea towards the bus on the shady side of the street; said no to an invitation to Bikram Yoga; delayed helping a friend relocate from West to East L.A…. you get the idea.

The time I saved from not showering was a great unforseen bonus.

But, if I’m being honest, the cons greatly outweighed the perks. My boyfriend repeatedly poked fun at my modified self-care, one of my dogs became fixated on licking my sweaty calves, I felt prohibited from doing anything that would cause me to sweat, and it was really hard to feel awake. It was a long, hard week.

Having completed the experiment, do I think it’s possible to forgo showering for long periods of time for the sake of saving water? Sure. But is it a pleasurable experience? No. To know L.A. is to embrace its warm weather and all the outdoor activities it has on tap—joys that demand a decent rinse more than every few days. Moreover, I felt like I was wearing the city on my skin. I love Los Angeles, but the last week has taught me I don’t like having her smog on my face for seven days. Three days, however? That doesn’t really stink.

Will a 45-mile Underground Tunnel Solve the SoCal Water Crisis?