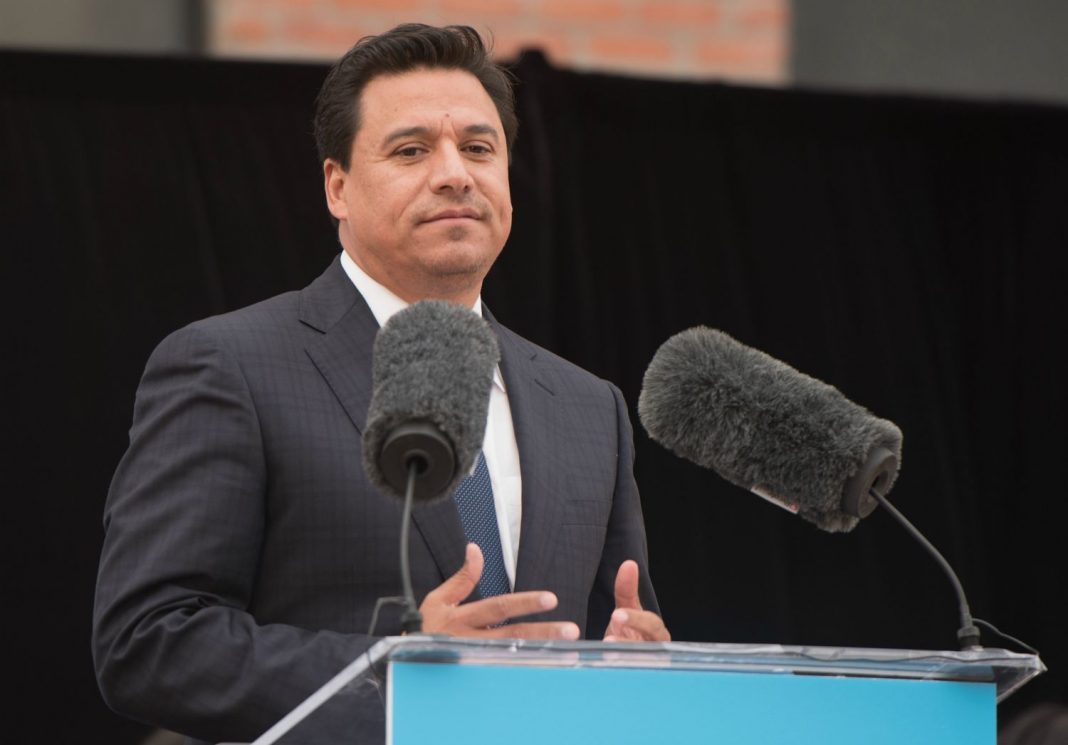 For the past three months, every news article, TV broadcast, radio spot, and web post about the City Hall corruption investigation included a variation of the line, “José Huizar has not been arrested or charged with a crime.”

So much for that.

The Tuesday morning arrest of the 51-year-old District 14 councilman, and the filing of one charge of racketeering against him, is simultaneously completely expected and utterly stunning. After four people, including former Councilman Mitch Englander, pleaded guilty to federal charges, everyone knew Huizar was a bullseye in the target—although prosecutors had not mentioned him by name until this week, the repeated biographical allusions to him in a series of court documents were less veiled references and more a screaming red arrows pointing to his office.

And yet, there is something jaw-dropping about a 15-year veteran of City Hall being picked up by federal agents at his home in Boyle Heights, and seeing him formally accused of running a criminal enterprise that operated in the epicenter of local government. He faces up to 20 years in prison.

To be clear, Huizar, who was released on a $100,000 bond, and faces a preliminary hearing on July 14, has not been convicted of any crime. His fellow council members immediately voted 14-0 to suspend him, but he’ll still have his day in court. For now, he continues to receive his council salary of about $4,000 a week.

As the details trickled out over the past few months, it was frequently stated that the situation seems like something from a crime novel, a sort of modern L.A. noir. But for anyone hoping to write that novel, sorry—the Los Angeles office of the U.S. Department of Justice just did it. The DOJ assembled an affidavit that runs 116 pages, and the three additional “Exhibits” sections bring it to a whopping 172 pages. This is longer than Ernest Hemingway’s 127-page The Old Man and the Sea, which also happens to be about reeling in a very big fish. But only one of those two creations includes chapters titled “Businessperson A Scheme” and “Huizar’s Obstructionist Conduct.”

Yes, the affidavit has chapters, and the work is so long that there’s a table of contents.

The DOJ and the FBI, which raided Huizar’s home and offices in November 2018, are not messing around as they seek to root out an alleged pervasive pay-to-play scheme built around the Los Angeles real estate development sector. But investigators also seem to be having bits of sly fun—just consider the arch wordplay they employ, like titling the investigation Operation Casino Loyale. At a Tuesday morning news conference, U.S. Atty. Nick Hanna rolled out so many perfect lines that you had to wonder if his ghostwriter gets a bonus each time one appears in a pull quote. City Hall, Hanna pronounced, has “concealed a cancer.” Boom! The cabal, he intoned, broke “a series of laws in order to line their own pockets, maintain power and keep open a spigot of illicit bribes and other benefits.” Kapow!

The broad strokes are astounding in their depiction of political hubris: Huizar allegedly received $1.5 million in cash and other benefits from downtown developers, in exchange for pushing favored projects through the city’s cumbersome approvals process. Of course, it wasn’t just Huizar, as the racketeering charge alleges that he rode herd on a criminal enterprise whose other members were also enriched—they include real estate players Justin Jangwoo Kim and George Chiang, and former Huizar aide George Esparza, who all pleaded guilty to federal charges. Expect more to come—Hanna took pains to state that the investigation is “ongoing.”

The affidavit is something of an Easter egg hunt, with sparkling finds for anyone willing to read all that text.

It starts with the scope of the investigation, which was ignited back in 2015, when Los Angeles authorities were tipped off by their Las Vegas counterparts to Huizar cashing in a bundle of casino chips. Over five years the Feds went deep, interviewing more than 75 individuals, obtaining more than 50 search warrants, and securing bank records, including for Huizar and three of his relatives. The affidavit notes that investigators utilized “pole cameras at known meeting locations.”

The public now knows that during the November 2018 raids, investigators seized $129,000 in cash stashed in a closet in Huizar’s home, and photos show wads of $100 bills, along with some red envelops with Chinese characters.

Speaking of photos, the affidavit has several, and they constitute a sort of nightmare chronicle of big-bucks lawlessness. There’s a four-pack of pictures from August 2016 showing Huizar cashing out casino chips that he was allegedly given by the chairman of a Chinese real estate firm seeking to build a 77-story tower in downtown L.A. There’s a 2017 shot of bundled bands of $100 bills, some secreted in a liquor box, taken on Esparza’s iPhone. There’s an image of Australian currency that Huizar and Esparza allegedly sought to bring back into the country and convert to U.S. dollars while evading bank-reporting requirements.

Then there’s the verbiage, with words and phrases that seem straight out of Goodfellas. The document notes that the crew referred to Huizar as the “Boss,” and that the participants called themselves “brothers and sisters” and “our group.” The whole enterprise was sometimes known as “the ship.”

While alleged bribes of $500,000 and $600,000 from representatives of different Chinese development firms have garnered headlines, the affidavit mentions smaller stuff, too. There was the time a hotelier allegedly sought to provide Katy Perry concert tickets worth about $1,000 for Huizar and his family. Another passage involves a businessperson shelling out $10,000 for Huizar hotel stays, including visits in 2017 for the councilman and a woman with whom he was allegedly having an affair.

Other elements are on the nose, including the section labeled “Money Laundering Through Family Members.” It details approximately $240,000 in payments by three Huizar relatives.

There are glimpses into the sausage-making factory that is the city approvals process, with the affidavit tracing the progress of a proposed Arts District development. Firm executives donated $125,000 to political action committees benefitting the campaign of a Huizar relative (details indicate this was his wife, Richelle, who briefly ran for his seat). The saga involved an executive at the firm who in 2018 provided opposition research to Huizar on two young female staffers who had filed harassment lawsuits against the councilman. Ultimately the project was approved, and with fewer affordable housing units than it had been expected to include. The green light, the affidavit declares, “decreased low-income individuals’ access to the project while ensuring [the developer] obtained an estimated $14 million in net savings.”

Another newly revealed facet is that Huizar and his legal counsel met with the FBI and the U.S. Attorney’s office in April 2019. The affidavit alleges that, during questioning, Huizar made false statements to federal agents during a discussion about bribe money.

Those who make it to page 115 get a late surprise, with a reference to an October 2018 conversation between Huizar and “Businessperson A,” with the councilman worried about interviews the FBI had conducted with the businessman. It reads, “Huizar instructed Businessperson A not to mention anything about parties or ‘dessert,’ meaning Huizar’s use of escort/prostitution service, which Businessperson A had provided at parties Businessperson A hosted.”

Perhaps the scariest component of the document involves plans for the future. While Richelle Huizar abandoned her bid for the CD14 seat shortly after the FBI raids, the affidavit reveals another grand ambition the family had to continue the gravy train: it mentions that José Huizar envisioned running for city attorney, or even mayor of Los Angeles.

Consider those plans on hold. Forever.

RELATED: How José Huizar Became Embroiled in the Worst Corruption Scandal in Almost a Century