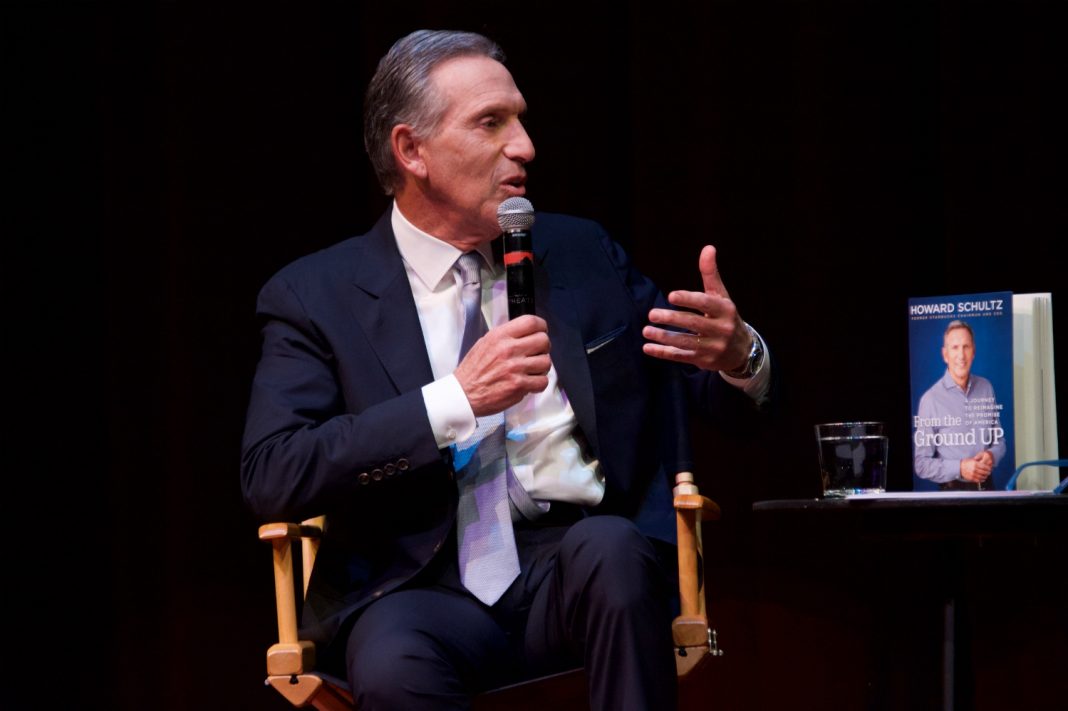 There was no complimentary coffee at New Roads High School on Thursday night. “At least they could have had the sous-vide egg bites,” groused one man who had come to watch Starbucks founder Howard Schultz speak with journalist Maria Shriver. But even without refreshments, dozens of MBA-types, adoring Starbucks employees, and curious politicos crowded the Santa Monica private school’s auditorium for over an hour of friendly banter between the billionaire tycoon and the millionaire Peabody-winner. While the event, hosted by Live Talks Los Angeles, had been billed as a discussion of Schultz’s new book, From the Ground Up, he mostly used the stage to respond to the last three weeks of heavy criticism he’s faced since announcing a potential presidential bid.

“We went on 60 Minutes to share with the American people the concern we have for the country and the fact that I think the two party system is not working,” Schultz explained (although it wasn’t clear who else the “we” referred to). “We expected there would be resistance and some blowback, but the character assassination and the level of heat that has come my way has surprised me.”

More than just the level of heat, the source of the heat surprised Schultz.

“The polling and the research that we’ve done in anticipation of this suggested that life-long, millions of Republicans who do not want to reelect Donald Trump because of character issues” would likelier vote for a centrist like Schultz than a left-leaning Democrat. “And so it was the Republicans who, we thought, would be coming after us.”

“I never imagined that my Democratic friends would go after us in such a visceral manner.”

And yet, for all that polling and research, Schultz was taken aback by the particular argument against him. “We did not expect that we would say these things and we would be linked directly—that our effort would re-elect Donald Trump and as a result of that we are going to try and stop you. I never imagined that my Democratic friends would go after us in such a visceral manner.”

Perhaps because of President Trump’s own (disputed) status as a billionaire, the very existence of billionaires has come under a higher level of scrutiny in the last few years. Galvanized by unapologetically liberal voices like Alexandria Ocasio-Cortez and Bernie Sanders, left-leaning voices have drawn a connection between the unprecedented accumulation of wealth and soaring income inequality. In a clip that went viral earlier in the month, Schultz seemed to display an out-of-touch hypersensitivity to his own wealthy status when he pushed back against the use of the term billionaire and substituted the phrase “people of wealth.” Social media went crazy.

Howard Schultz says billionaires should be referred to as “people of means” or “people of wealth.” pic.twitter.com/I3apM0h7aa

“I think that’s an example of saying something in a public place (like this), and then a soundbite is taken out and misunderstood,” Schultz said in his defense. “Anyone who has made money in America—let’s say rich people, whatever that means—needs to pay more taxes.”

“I need to pay more taxes.”

Less than a minute later, Schultz added that “the reason that, right now, that is being debated at such a high level among people who have money is because they don’t have confidence that the government’s going to spend that money well, because there hasn’t been a history of that.”

The discussion was light on policy. Instead of pointing to specific shortcomings or solutions, Schultz blamed an absence of focus “on the long term” for America’s struggles.

“We can’t get a subway built in New York City on time or on budget.”

When pressed to for an explanation, Schultz pointed to the $22 trillion national debt. “That does not give us the flexibility to think long term,” he argued.

“The great thing about post-World War II, if you go back in history, was the Marshall Plan,” Schultz said, referencing the $17 billion aid initiative that provided aid and assistance to a war-ravaged Western Europe (in today’s dollars, the plan would represent an investment of over $190 billion). “What the country really needs is a Marshall plan for America.”

Schultz has never run for political office or publicly floated the idea before now. Just 14 hours before he took the stage, the Seattle Times reported that Schultz had not cast a vote in a recent Seattle election, adding to a “pattern of ignoring many elections over the decades, even while urging increased civic and political involvement by Americans.”

But Schultz explained that his presidential ambitions come from a sense of civic responsibility.

“If I run for president, I’m running as an American—wrapping myself in the American flag to do everything I can for the American people who get left behind. As a kid who grew up poor and still has the shame and vulnerability and the scars of that, I really want to do that.”

“That’s why I want to run for president,” he concluded, ceding the floor to credulous applause.