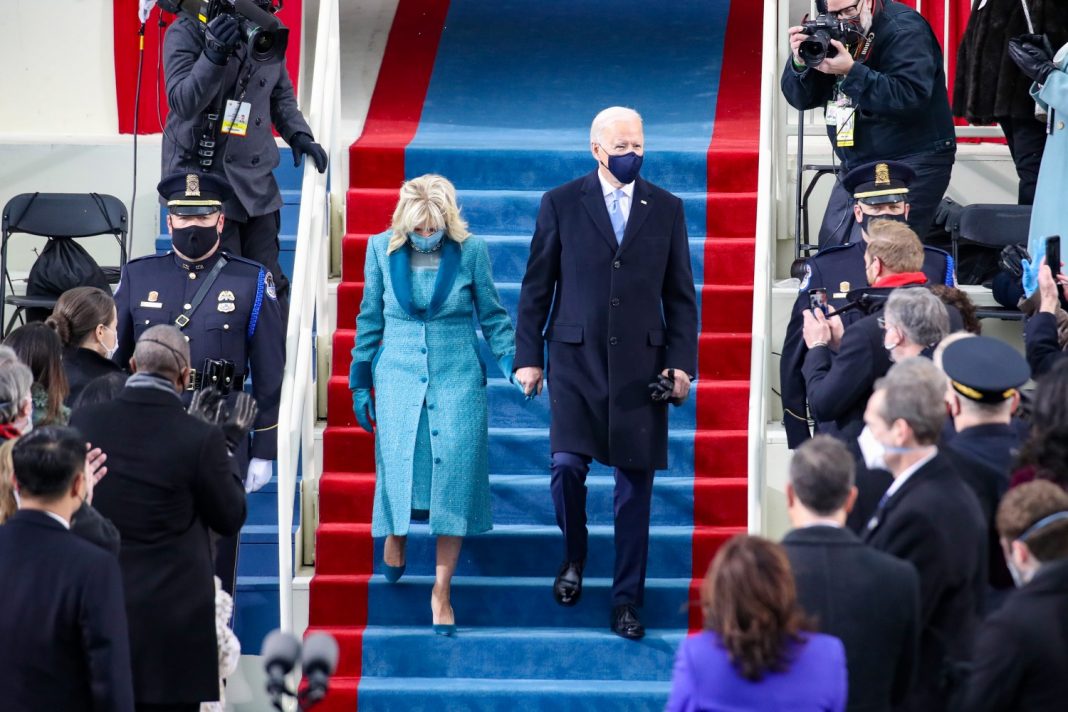 UPDATE: JANUARY 20 – We officially have a new President and Vice President of the United States. If you missed any parts of today’s inauguration, or just want to re-watch any parts you might have wept through the first time around, you can catch up with the video clips below. Events continue into the afternoon and evening, including appearances by Jon Stewart, Bruce Springsteen, and others.

JANUARY 18 – It would be impossible–and maddening and tragic, though occasionally beautiful–to list all of the ways in which the inauguration of Joe Biden and Kamala Harris will be unusual and historic. But, suffice it to say, it’s certainly going to be a day that many, many people have been eagerly awaiting. While the in-person affair will lack some of the traditional trappings, we can at least watch the public proceedings from wherever we are.

When Can I Watch the Biden Inauguration?

Since the adoption of the 20th Amendment in 1933, the Inauguration of the President and Vice President of the United States always takes place on January 20. The term of the outgoing office-holders ends at noon that day, and the swearing in of the newly elected individuals takes place shortly thereafter.

Pretty much every news channel will have their teams in place starting around 7 a.m. our time (10 a.m. in Washington) and will be continuing through the day. C-SPAN will have a live, free feed, and if you want to get into the spirit early, they have footage of historic Inaugural addresses available to watch right now.

History note: Presidential Inaugurations long took place in March. But, between the election of Abraham Lincoln in November 1860 and his inauguration in March, 1861, secessionists staged a number of attacks on federal facilities. Looking back on the time a few decades later, politicians felt the Civil War might have been prevented or at least handled more effectively had the new president been in power a bit sooner. The date was officially moved from early March to January 20 when the 20th Amendment was ratified in the 1930s.

What Will There Be to Watch?

The swearing in ceremony and formal address from Biden are expected to take place outside the Capitol, as is traditional.

That event will include:
» Invocation by Jesuit priest Father Leo J. O’Donovan
» The Pledge of Allegiance read by firefighter Andrea Hall, one of the few Black women to become a fire captain in America
» Lady Gaga singing the National Anthem
» Poetry reading by National Youth Poet Laureate Amanda Gorman, an Angeleno
» Musical performance by Jennifer Lopez
» Musical performance by Garth Brooks
» Benediction by Reverend Dr. Silvester Beaman, pastor of the Bethel African Methodist Episcopal Church of Wilmington, Delaware, and a longtime friend of the Bidens

Following the ceremony, Joe Biden, Kamala Harris, and their spouses will participate in the Pass in Review, a formal military proceeding that reflects the peaceful transition of power, a tradition which dates in its current form to 1873.

After that, the new President and Vice President will proceed across the river to Arlington Cemetery, where they and their spouses will be joined by former Presidents and First Ladies Obama, Bush, and Clinton, to honor military personnel.

There will be no real parade, but in its place will be a “virtual parade” with remote appearances. “The parade will celebrate America’s heroes and reflect on the diversity, heritage and resilience of our country,” the Inaugural Committee says.

Actor Tony Goldwyn (Scandal) will host the parade; other participants include Jon Stewart, and athletes Nathan Chen, Allyson Felix, and Katie Ledecky. The New Radicals, a band which has not played together in 22 years, will reunite for a performance, and Nathan Apodaca aka Doggface208 from the skateboard TikTok, will make an appearance. There will also be marching bands, dance troupes, and other performers representing all 56 states, territories, and the District of Columbia.

When Does ‘Celebrating America’ Happen?

In lieu of the usual parties, the Inaugural Committee has organized a televised event named Celebrating America. Starting at 5:30 p.m. (8:30 in Washington), the event will salute “American heroes who are helping their fellow Americans through this crisis, including frontline workers, health care workers, teachers, citizens giving back, and those who are breaking barriers.”

The show, which will be carried on ABC, CBS, CNN, PBS, NBC, and MSNBC, as well as streamed, will be hosted by Tom Hanks and feature remote performances by Bruce Springsteen, Justin Timberlake, Jon Bon Jovi, Ant Clemons, the Foo Fighters, Demi Lovoto, and John Legend. Kerry Washington and Eva Longoria, who popped up as hosts of the virtual DNC last summer, will also participate.

Is Anything Else Happening?

Lots of things, actually. And this year, you’ll be able to “attend” since they’re being streamed to everybody at bideninaugural.org, where you can also find a full schedule, which includes a Martin Luther King, Jr. tribute and a memorial for lives lost to COVID-19.

On Sunday, catch the We The People Concert hosted by Keegan-Michael Key and Debra Messing. The show will feature performances from James Taylor, Carole King, Ben Harper, Will.i.am, and Fall Out Boy. Fall Out Boy’s bass player, Pete Wentz, has a special connection to Joe Biden: His parents met while working for the then-Senator in the 1970s.