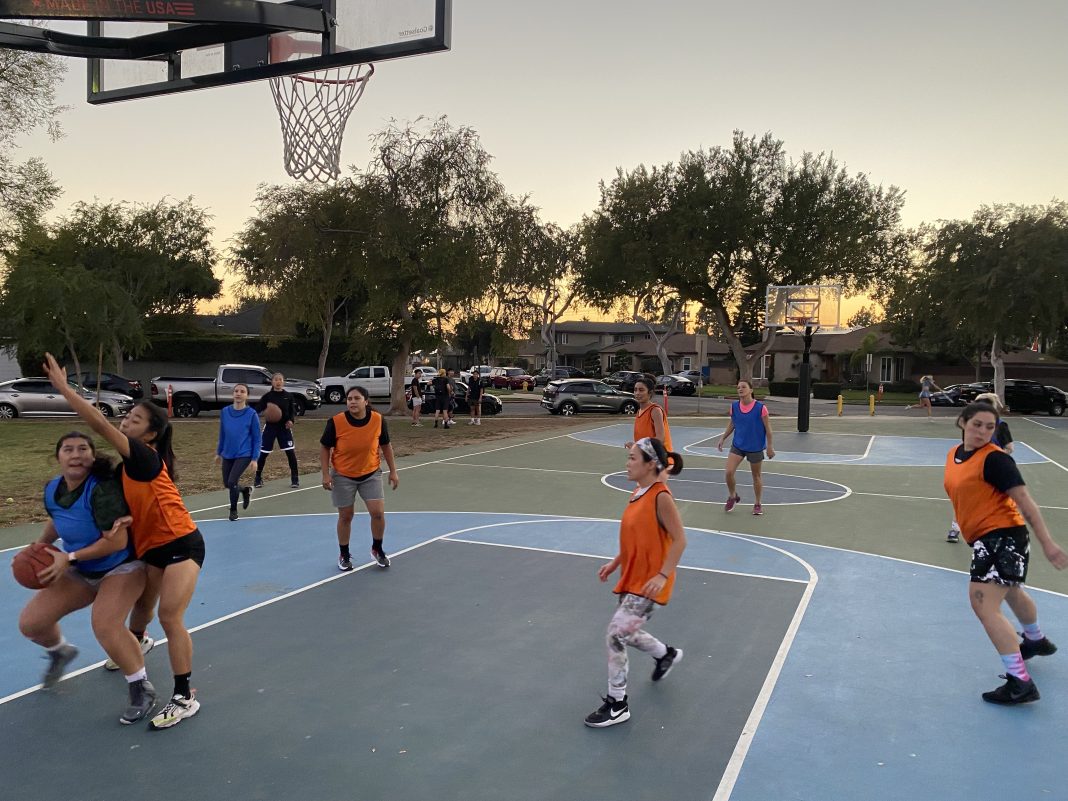 Jess Smith was standing courtside trying to remember how old she was when she fell in love with basketball when a young man approached and asked Smith if she and the other women warming up were going to use the whole court.

“Yeah, I think we are,” Smith politely told him. “Sorry.”

A couple minutes later the young man returned, interrupting again to ask if the women would mind to “start using it right now.”

The women of SheHoopsLA obliged the impatient young guy, moving from warm-ups to the first of several full-court games at Veterans Memorial Park in Culver City. For the last several months, they’ve been getting together at the park twice a week to play basketball, get outside, and make new friends.

And occasionally they have to let the boys know that the court belongs to them.

“I always have to get here 20 to 30 minutes early to have that conversation with someone. It’s like ok, ‘Serena, prepare for confrontation.’”

Serena Green started SheHoopsLA about a year ago. After losing her mother suddenly in 2016, Green said she spent years shut down before she was able to pick herself up and get back to work. Even then, she was vulnerable, and she wanted to be careful about who she was letting into her life.

“If you can’t find what you’re looking for, then I believe in building it yourself,” Green said. 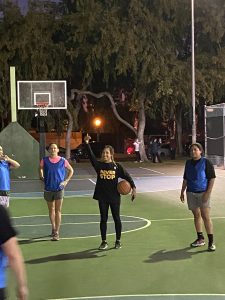 So she decided to start a basketball league for women, going to Meetup.com and letting people know that she’d be at the park. It was March 2020, and she got three RSVPs. When the day came, nobody showed up except Green. A new virus was keeping people inside.

After a pep talk to herself, Green went back to work. This past May, she decided to try again.

SheHoopsLA is now 280 members strong. While they don’t all show up at the same time, there are plenty of players to run five-on-five full-court with plenty of women waiting to sub in. On a recent Thursday night, Los Angeles Magazine counted 20 women in attendance. There are no fees to play. Green pays for the cooler of Capri Suns herself, and she drags it to the court, telling the men along the way that no, she’s not there to sell drinks.

They play four eight-minute quarters, with Green counting down from 10 when she remembers to check the time, creating the opportunity for some last-second heroics. Before each game starts, Green has the two teams meet at halfcourt so everyone can introduce themselves to each other. The women play hard, but they don’t usually keep score.

“I don’t want it to be another competitive environment for them,” Green said. “We already have that at work. We have that in our day to day. It can cause a lot of insecurity, especially for women in the social media/digital age. I just wanted it to be a place where people can just show up, decompress and not have to think about competition. There are other leagues for that”

But she said the group brings in players of all skill levels, including the occasional pro who is looking for a place to practice.

Diamond Bishop discovered the group through her boyfriend (he brings an industrial sized speaker and hip hop fills the air as the women play). Bishop plays for Glendale Community College. She practices five days a week with her team and then plays with SheHoopsLA twice a week.

Green says that while all women of all skill levels are invited, the group is “very much beginner.”

“I have people who Instagram me saying, ‘I’ve never played. Can I still come?’ Yes! You can!” she said. “This was actually made for you. It’s for people who want to get back outside and just connect.” 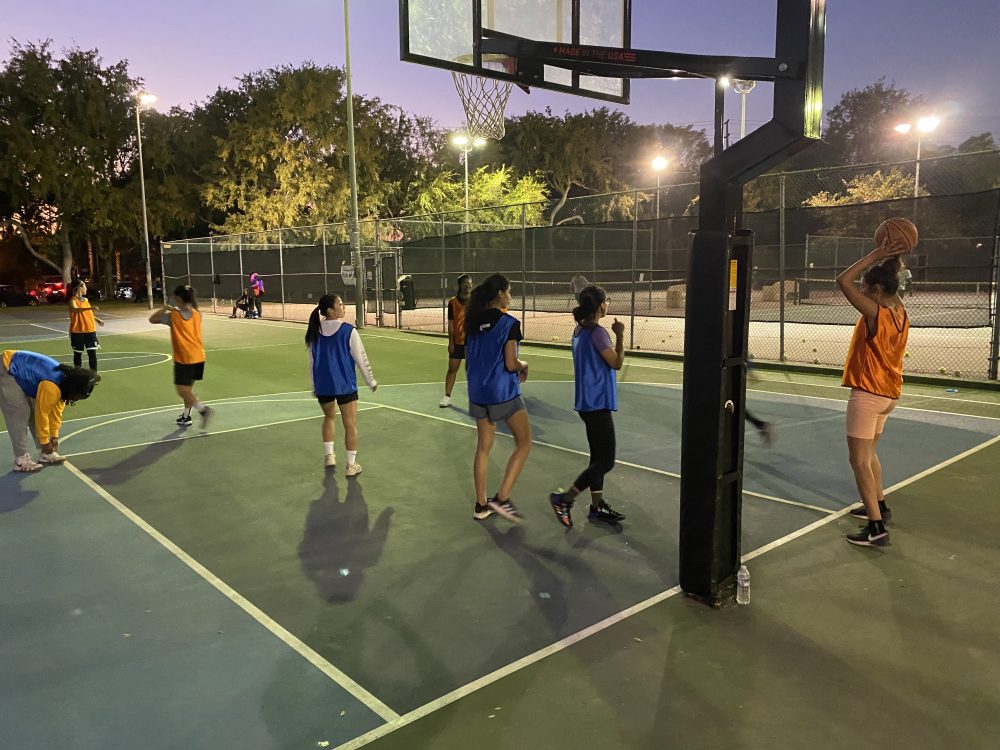 Sholeh Sayareh and her sister, Shireen, were first-timers at SheHoopsLA when Los Angeles talked to them. Sholeh Sayareh has been dribbling a ball since she could walk, playing in high school outside of Sacramento. Until she found Green’s group, she usually played at the gym “with a bunch of guys.” It wasn’t ideal.

“I’ve played with a lot of dudes at the gym, and they don’t really respect women,” Sayareh said. “Which really sucks because we’re actually really talented and we don’t cry about a lot of things. I’ve noticed… a lot of guys actually whine about small fouls and stuff. Girls, we tough it out. We just play. We don’t argue. It’s kind of annoying when guys at the gym argue about the score and about traveling, you know, all that stuff. I just want to play and have fun.”

Still, the sisters said they were nervous to attend their first game, experiencing first-day-of-school nerves, which faded fast once the ball was up.

“It’s fun,” Sholeh Sayareh said. “Nobody gets mad. Nobody gets hurt. We’re all just here for each other.

“I hope we can… meet actual friends, lifetime friends here, because it’s hard meeting people in a big city.”

Smith, 28, has been playing with the group for about two months. She admits she had some rust to shake off initially since she hadn’t played since developing tendonitis in both knees while playing in high school.

Smith, like several of the women interviewed for this story, said the games have given her a way to make new friends after moving to Los Angeles from Oregon 12 years ago, something that is increasingly difficult in a big city as people get older and a pandemic keeps more of us isolated and working from home.

“With my job, I work from home… and I work by myself so you really don’t get to meet people in… a work environment,” Smith said. “And so moving here you don’t have a lot of friends  and so yeah, just joining this group has been so rewarding for me. There are people from all different walks of life with all kinds of different jobs. It’s so amazing to see. It gives me something to look forward to in the week. I just love this group.”

As the group has grown, so has their camaraderie. When the new Space Jam came out, they went to the movies as a group to see it. They are planning a Halloween potluck. And in September, they got an invite to take their game indoors, if only for an afternoon. But it was an afternoon on the WNBA’s biggest stage — the L.A. Sparks’ floor at the Staples Center.

Douglas Berrios is an account executive with the Sparks, and he is always on the lookout for two things — ways to grow the game for women and new Sparks fans. So it was a natural fit when Berrios reached out to Green to ask her if her group would like to play at the Staples Center.

“Their whole mission was to provide a safe environment for women of all ages to play basketball… and that’s when I reached out to them to learn more about their organization and what they do for women,” Berrios said.

Green said she called in sick to work and about 20 women went downtown to the iconic arena to play under the bright lights. Afterward, they stayed and watched the Sparks play the Connecticut Sun before going out to dinner.

He added: “For some of them, it was a dream come true.”

When the helicopter carrying Kobe Bryant crashed in January 2020 killing everyone on board and ripping L.A.’s heart into pieces, Bryant and his daughter, Gigi, were on their way to a basketball game. Kobe was coaching Gigi’s team.

Since his retirement in 2016, Bryant had emerged as one of the most vocal male proponents of the women’s game. When he passed, several high-profile women players said they had lost a powerful advocate.

As a reminder of what he did to help them grow, a picture of Bryant and his daughters at a Sparks game hangs in the team’s offices. 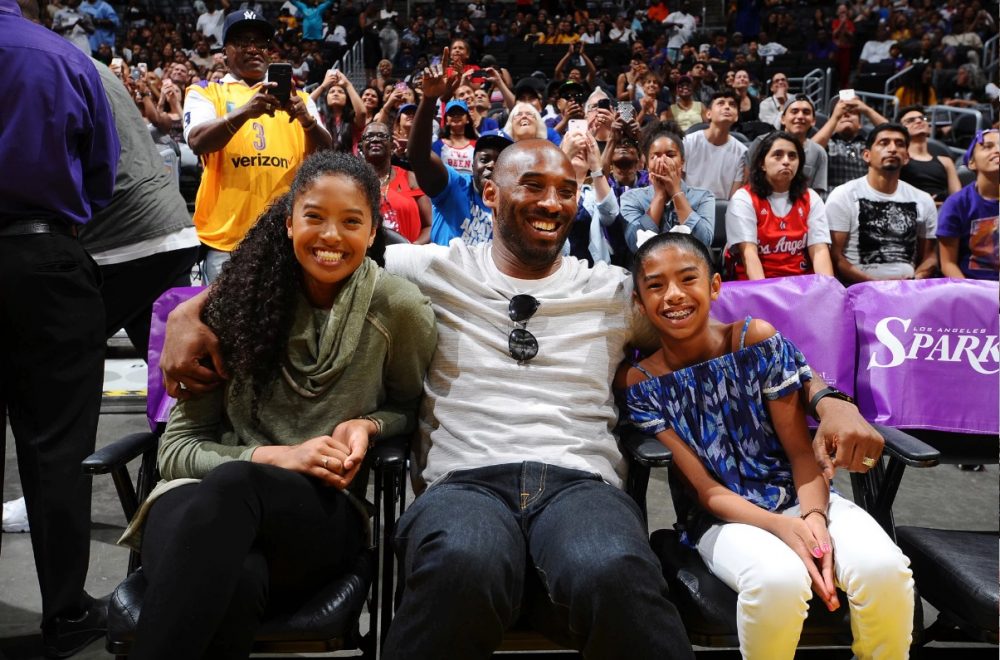 “That picture to us means so much because it was at our game,” Berrios said. “We see this iconic picture every single day to remind us that the women’s game shouldn’t be an afterthought.”

If anyone understands taking loss and turning it into a positive, it’s Green. While the pain of losing your mom never goes away, Green has found family on the basketball court.

“I definitely needed companionship. I needed support myself,” she said. “Now that I’m on my feet… I’m able to give this energy back to whoever needs it now.

“I’m so blessed to have met so many amazing people.”