Home L.A. History Echo Park’s Iconic House of Spirits Sign Has Been Rescued by the... 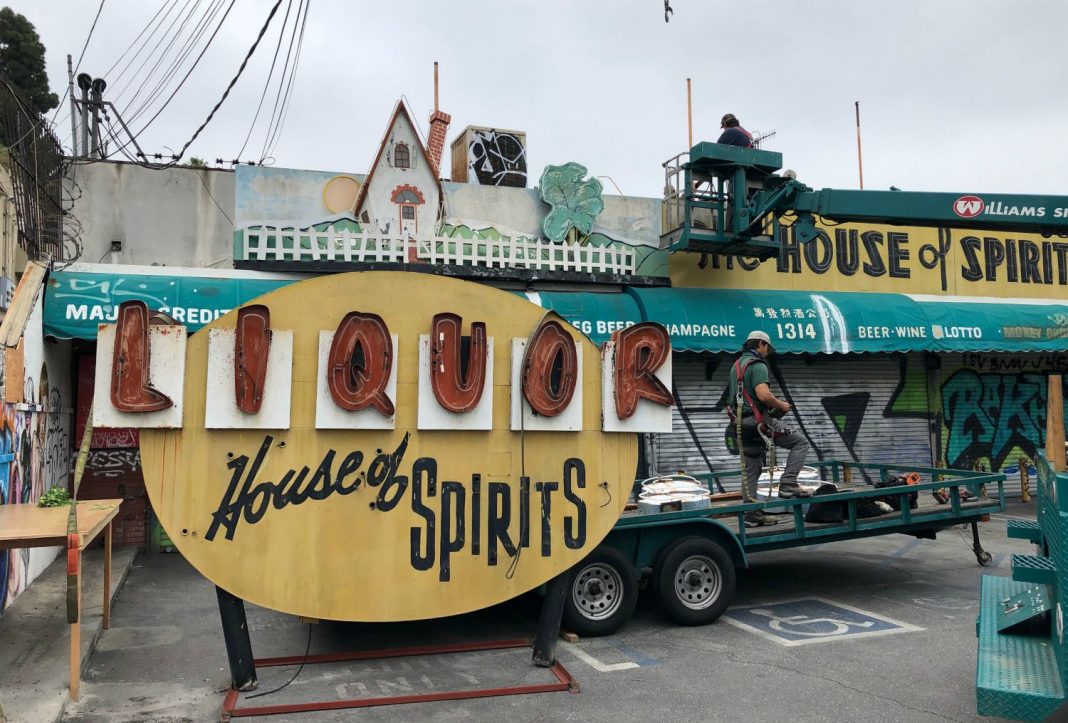 Folks wandering by Sunset Boulevard and Echo Park Avenue this morning may have noticed that the puffy clouds drifting overhead were made of steel and hanging from a crane. The iconic collection of vintage 1950s signage was removed from the House of Spirits today by Glendale’s Museum of Neon Art and will be restored by the museum, which hopes to eventually put them on display near their current location.

The Telis family, who has owned the building for 50 years and ran the neighborhood store for much of that time, donated the storybook house with the crooked chimney, white picket fence, and neon tree after many months of negotiations with the museum.

“They took great pains to protect the sign and put it in good hands,” says museum director Corrie Siegel. “They know that we have the best interest of the community at heart.”

The store closed after a major fire last year and the ruins have been ransacked. A neon liquor bottle that was once part of the composition was stolen and is still missing, so the museum knew it was time to act. “We’re putting up a banner in English and Spanish,” says Siegel. “We wanted to explain where the sign is going and that we hope to return it.”

The bucolic tiny house and streamline “House of Spirits” lettering measures about 50 feet long and fills the entire face of the building. “It’s beaten and weathered,” says museum president Eric Lynxwiler. “But the tubes are intact, and we will clean it up until we find a new home for it in Echo Park.” The museum owns several of the classic signs on display at Universal Citywalk and leases them to the shopping center.

Potential buyers had approached the family, including a developer who wanted the house to promote their business and one with an idea to change the lettering. “We want to put it back in its entirety,” Lynxwiler said. “We don’t want to see it changed to ‘House of Burgers.’”

RELATED: The Happy Foot/Sad Foot Sign Is Safe and Sound Inside a Los Feliz Boutique