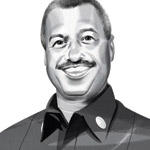 Despite the hoses, ladders, and red trucks, today’s firefighters perform CPR more than they battle flames. “Eighty-five percent of what we do now is respond to emergency medical service calls.” L.A. is also home to a diversity of disasters. “We are a unique city: 4 million residents spread out over 470 square miles with major airports, freeways, river systems, a port, high-rises, and wildlife-urban interface. A firefighter has to be a jack-of-all-trades.” Which is why Cummings is pushing for more LAFD funds. “In 2009, our budget was $561 million. Over two years we reached a low of $472 million. We lost 11 engine companies, seven truck companies, and some ambulances. We haven’t hired in close to four years now.” But that doesn’t mean we should go for the garden hose if there’s a big fire. “Let the skilled professionals do that work. We prefer that the public evacuate and everybody is safe.”