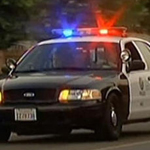 Riding Shotgun: A Front Row Seat with the LAPD
What is it like to ride shotgun in a squad car, siren blaring during a police chase through the heavily trafficked streets of L.A.? One unsuspecting passenger got a front-seat view when a planned ride-along with the LAPD turned into a real-life episode of Cops—and the dashboard camera caught it all on tape. Fasten your seat belt, there’s a bad guy on the run

Breaking ‘90s News: The LAPD First Installs Dashboard Cameras
Today dashboard cameras are as common in police cars as sirens. But as recently as two decades ago, that was not the case. The Los Angeles Police Department first tested an in-car surveillance system when three-dozen cameras were installed in squad vehicles in the ‘90s. This news report is a time capsule of surveillance tech—as well as one criminally over-coiffed anchorman.