Home Health What’s Being Done to Prevent a Coronavirus Outbreak Among L.A.’s Unhoused? 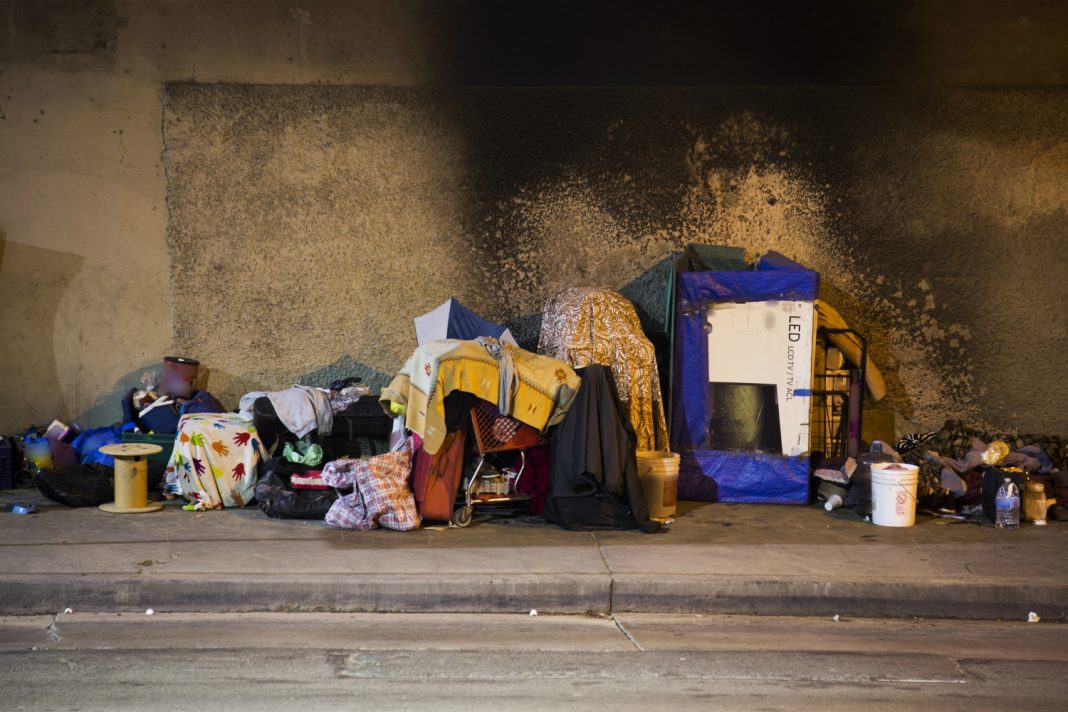 With the number of coronavirus cases on the rise in Los Angeles, public health officials are asking that people play it safe by staying home if they are sick, washing their hands frequently, and keeping their distance from others. But for the region’s nearly 60,000 homeless people, following this protocol can be difficult—if not impossible—task.

Often lacking ready access to hygiene facilities, relegated to close quarters like shelters and encampments, and unable to self-quarantine, homeless individuals run double the risk of contracting the highly contagious COVID-19 virus, according to healthcare experts. Unsheltered people are also far more likely to have underlying health conditions that could lead to life-threatening consequences.

Though none of the 20 (and counting) cases confirmed by the Los Angeles County Department of Public Health have impacted the area’s homeless community so far, officials say they are working with shelter providers and street teams to block the spread of the virus in shelters and encampments before it begins, by helping shelters provide medical services for sick people and giving targeted information to those who are homeless.

In a briefing on Tuesday, L.A. County Public Health Department director Dr. Barbara Ferrer said that if an outbreak in an encampment or shelter did occur, it would create a “uniquely complicated” problem for county health officials, who would be unable to provide shelter and quarantine conditions if a large group of individuals. “We would be scrambling with a lot of difficulty should we have outbreak that was more than a few dozen people right now,” Ferrar said.

The director of the county department of public health said that if an outbreak in an encampment or shelter did occur, it would create a “uniquely complicated” problem for county health officials.

In the meantime, nonprofits and advocates are taking their own preliminary precautions against the virus. Reverend Andy Bales, president of Union Rescue Mission, said the skid row shelter has installed hand-washing and sanitizing stations inside and outside of its facility, created quarantine areas for sick individuals, increased the space between beds, ordered protective gear for workers.

“We’ve also put up signs throughout the mission in English and Spanish, saying that if you have a fever and a cough to alert staff and you will receive shelter and services,” said Bales. “Just to reminding people that they won’t have to hide any illness.”

The Mission has also requested coronavirus testing kits, though Bales says they are “at the bottom of the list,” and don’t expect to receive them anytime soon. He hopes that in the coming days, city and county officials will make an effort to install more hygiene stations for people living outdoors, and to steer people to shelters where they can get proper care. “Whatever it takes to set up a triage, to bring people in from the street into proper facilities with restrooms and showers, that would be the best,” he says.

Last week, councilmembers Mitch O’Farrell and Monica Rodriguez introduced a motion to Los Angeles City Council directing the city to provide hand-washing stations at encampments, but Rodriguez says information about where and when these will be installed is still pending. “The Bureau of Sanitation, working in consultation with Los Angeles Homeless Services Authority, as well as our Department of Water and Power, are trying determine the scale [of the project],” said Rodriguez. “We’re waiting for them to report back.” Councilmember Jose Huizar also introduced a motion this week, asking the Bureau of Sanitation and LAHSA to recommend additional hygiene options for skid row.

Advocates have long called for more mobile hygiene stations and bathrooms to be deployed for L.A.’s homeless residents. After a Hepatitis A was declared in 2017, a handful were installed in skid row and other parts of the city, but critics say many more are needed to maintain sanitary, humane conditions in encampments.

San Francisco city officials announced earlier this week that they would allocate $5 million to preventing the spread of coronavirus among the city’s homeless population. They plan to spend it on operating shelters around the clock, hiring cleaning crews to scrub shelters and city-funded housing, and dispensing hand-cleaning supplies and sanitizer.

In San Jose officials have stopped conducting sweeps of homeless encampments in order to prevent people from losing access to medical equipment, losing sleep, or spreading the virus to another area if they are ill. Homeless advocates in L.A. have repeatedly called for an end to the city’s practice of sweeping encampments, citing the harm displacement causes.

Other CA cities have deployed hand-washing stations at encampments to combat this public health crisis. I don't know what is taking LA so long, but I'm not waiting. Ordered washing stations w my office budget & we will start rolling them out tomorrow. https://t.co/2zwD536luL

On Twitter, councilmember Mike Bonin criticized the city of Los Angeles for taking so long to deploy hand-washing stations when other California cities have already made efforts to do so. “I’m not waiting,” he tweeted. “Ordered washing stations [with] my office budget & we will start rolling them out tomorrow.”

Jane Nguyen of the advocacy group Ktown For All says they’re also planning to take things into their own hands. She says the group is planning to order extra sanitary supplies this week, which will be distributed during their weekly outreach efforts in Koreatown this weekend. “We’ll order some water pumps and we’ll give away soap this weekend in addition to our regular distribution of wet wipes,” Nguyen says.

RELATED: Is it Safe to Ride Metro? Tips for Taking Public Transit During the Coronavirus Outbreak