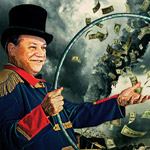 Bruce Friedman will never be as notorious as Bernard Madoff, but federal authorities discovered that for several years he held the same line of work: scamming people out of their life savings. On March 4, 2009, just a few days before Madoff pleaded guilty on 11 felony counts in connection with his massive Ponzi scheme, Friedman was accused by the Securities and Exchange Commission of stealing millions of dollars from investors—also through a Ponzi scheme—and spending it on luxuries that included a $6.5 million Malibu home, a $245,000 Bentley, and hundreds of thousands of dollars’ worth of jewelry. Many of Friedman’s victims, like Madoff’s, are elderly and will probably never recoup their retirement savings. As of early spring, less than two cents on the dollar had been recovered.

“A lot of us got snookered into this,” says Jama Bowlby, a retiree from Constantine, Michigan. She and her husband, Orrin (a three-time cancer survivor), lost their house and 16 acres of farmland to foreclosure—all because they listened to a local insurance broker who kept coming back with a pitch that would have had their house paid off in a few years by investing in Diversified Lending Group, Friedman’s Sherman Oaks-based firm. The Bowlbys were reluctant, but they checked out Friedman on the Internet and through the Better Business Bureau. “We never found a bad thing about this company,” Bowlby says. “We thought, Well, maybe this is the route we should go—pay it off, and when it’s done, have a little extra money in the bank.”

So they had their home refinanced, with Diversified receiving $100,000 worth of the equity and agreeing to make monthly mortgage payments. For about a year it seemed to be working. Then came word that the SEC was charging Friedman with fraud and that a federal judge was freezing the assets of Diversified Lending, effectively shutting down the operation. The Bowlbys couldn’t begin to assume the payments because as part of the refinancing, their monthly mortgage had more than doubled, to around $1,000 (the bank turned down their request for a loan modification). And the $100,000? “It’s a total disaster,” says Bowlby, telling me that they’re in the process of moving out of their house and into a two-bedroom mobile home in nearby Sturgis. “A lifetime of work for nothing.”

What’s remarkable about this story is just how unremarkable it is in the world of Ponzi schemes. Investors are recruited, money is raised, payouts are made, and eventually the enterprise becomes so large that it can no longer be supported. The fraud falls apart even faster during an economic downturn, when there aren’t enough new investors in the pipeline. As authorities took over Diversified Lending’s offices on the 12th floor of a Ventura Boulevard office building, changing the locks and obtaining computer passwords, they discovered that the firm had no listing of assets, no record of paying state or federal taxes, and no financial statements other than several incomplete electronic checkbooks. Only by subpoenaing bank records did the court-appointed receiver, David Gill, begin to piece together the scheme.

He’s still determining how much Friedman, who is 60 and lives in the San Fernando Valley, has made off with, but it’s easily more than $40 million. Hundreds of people got hit, mostly from Southern California, Michigan, Ohio, Florida, Texas, and Arkansas. What infuriates many of the investors is that Friedman will not go to trial on the charges. The SEC has settled with him—all that’s left is calculating how much money he’ll be able to return and negotiating a civil penalty. Criminal charges remain a possibility—the FBI and Justice Department have been conducting interviews—though a higher threshold of proof would be required than for the SEC’s civil case. That was easy with Madoff (he pleaded guilty and is serving 150 years), but it’s harder when evidence or testimony cannot prove guilt beyond a reasonable doubt. Many of the investors have attorneys who are trying to get back what they can, not by suing Friedman—he’s pretty much tapped out—but by focusing on the middlemen who sold the notes on behalf of Diversified.

It’s a cliché in this post-Madoff world, but Friedman certainly didn’t look the part. With his bulky build, salt-and-pepper hair, and conservative wardrobe, he could have passed for any of the thousands of other businessmen in town peddling investment strategies. “A real charming guy,” says one lawyer who has had frequent conversations with him. “He would be perfectly able to sit there and convince you that the moon is blue.” Investors who dealt with him directly say he seemed sharp and could persuasively answer their questions. “A lot of scam artists think that they’re smarter than anyone else, and at some point they develop kind of a God complex where they believe they can’t be caught,” says Ken Yormark, who specializes in forensic accounting with the consulting firm LECG, which is based in Emeryville, California.

Ponzi schemes are almost always about lies and omissions—one layered on top of another. For Friedman, who declined to be interviewed, it started with describing Diversified Lending in sales literature as a “boutique mortgage banking firm with more than 80 years’ experience” (the firm opened in 2004). Promissory notes offering annual returns of 9 or 12 percent were guaranteed by Diversified (you can’t guarantee something without providing adequate collateral, which Friedman didn’t do). A network of insurance agents sold Diversified notes to investors (the agents weren’t registered to sell securities). The firm’s auditor was listed as the American Accounting Association (which is actually a research organization that doesn’t audit companies). Diversified claimed that its assets totaled $655.7 million (cash receipts for the firm’s entire existence amounted to $255.5 million, mostly from investor deposits). “The representations made to investors were never remotely true,” Gill said in a report.

Friedman spent wildly—among the line items found by the receiver were $80,000 at the Reef Atlantis resort in Nassau, $27,500 at Nordstrom, $50,000 in Dodgers tickets, and tens of thousands of dollars for private planes. He gave $275,000 to a woman in Scottsdale, whom the SEC complaint described as his girlfriend. Another $800,000 went toward the production of Rock Prophecies, a 2009 documentary about the photographer Robert M. Knight (Friedman is listed as an executive producer), and $26 million was used to buy MRI equipment for a health care company. Virtually none of the money he received was invested in real estate, which supposedly was Diversified Lending’s main business.

Aside from spending money on himself, Friedman had a less obvious side—that of a budding philanthropist. A year or two into his run at Diversified he started his own charitable foundation, which, according to its Web site, “encourages youths to attain higher levels of education and use that increased knowledge to advance a greater understanding and desire to improve the society in which they live.” His first big donation was the $1 million he and his wife, Wendy, gave to construct a park in Calabasas for special-needs children. The park had been the inspiration of his sister-in-law, the mother of a disabled youngster. “I said ‘I need a million dollars’ really flippantly, like it was 50 cents, and he said ‘OK.’ I was shocked,” Dina Kaplan told The Jewish Journal in 2006. For their gift the Friedmans’ names were engraved on the Wall of Honor at Calabasas City Hall. Friedman also established scholarship funds for students in the Los Angeles Unified School District and pledged up to $5 million to help the Dodger Dream Foundation build 42 youth baseball fields. Just months before the SEC suit, he made an anonymous $10 million gift to the financially struggling Children’s Museum of Los Angeles, money that was to have spearheaded construction of a new building. When that check never came, the museum was forced into bankruptcy.

The question you might be asking is, How did he get away with his scheme for so long? His was no small fraud—lots of players and deals were getting commingled, and increasing amounts of money were required to prevent Diversified from collapsing on itself. Besides, Friedman had a criminal record. In 1981, he was convicted of grand theft and served 23 months in prison for stealing $300,000 from Avery International Corporation, the Pasadena-based maker of labels and self-adhesive products. None of this was hidden; it’s just that no one had any reason to ask questions. People thought Diversified was making money. Friedman only acknowledged his record—along with an old bankruptcy filing—in late 2008, when authorities began snooping around and chat rooms like Scam.com were filling up with concerns. “This whole thing stinks to high heaven,” wrote one person whose parents had invested $250,000. Someone else added, “I looked into this organization 18 months ago. I was extremely skeptical at that time, and am even more so now that the economy is in such trouble.”

A lot of other Ponzi schemes had been falling apart, and typically for the same reason: Not enough money was coming in, and too much was going out. In 2009, the Associated Press reported more than 150 of them in the United States had failed, up from about 40 a year earlier. The SEC doesn’t break out statistics for its separate offices, but Rosalind Ramsey Tyson, director of the L.A. region, tells me that “enforcement cases are up across the board, particularly with respect to Ponzi schemes.” There’s no shortage of local examples posted on the SEC Web site: a scam targeting retired L.A. bus drivers, another one that used a Farsi-language radio program to recruit Iranian American investors, and still another that coaxed California retirees into buying promissory notes for “investments” in Turkish Eurobonds.

I suppose folks believe what they want to believe. With retirees and near-retirees desperately looking for income-producing investments after the stock market collapse, and with 12-month CD rates running about 0.6 percent, an annual 12 percent guaranteed return might look tempting. I’ve even heard that some investors figure they can find a Ponzi scheme and play along by putting in their money early and pulling it out early, before the pyramid collapses. The reasoning is immoral and flawed, but in a Ponzi culture, everyone’s a potential mark. Just ask the Bowlbys.