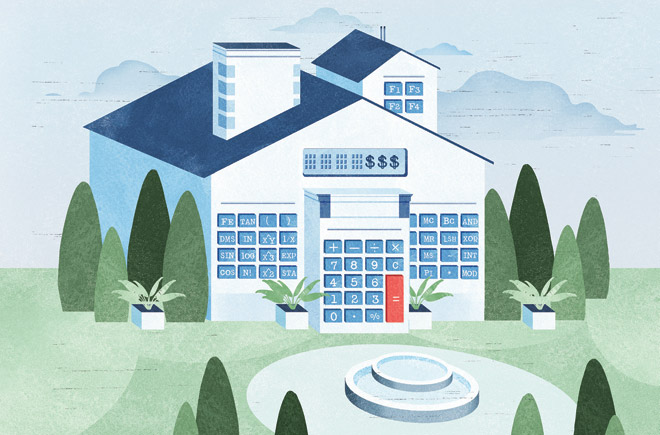 All I can say is, I am deeply thankful not to be looking for a house. It is madness out there. War stories abound. Sharing them is the current L.A. party fodder. We have gone from foreclosure to buying frenzy in a head-spinning nanosecond. A mortgage broker who just helped me refinance says he has clients who were outbid on 12 different houses and are licking their wounds or adjusting their dreams or whatever you do at such a moment.

I have friends who came out on the winning end of the real estate game but only because they were willing to buy a house in Los Angeles sight unseen. Crazy, right? They currently live in the East but want to relocate here when their work stints are done. On visits they combed the city from Mar Vista to Carthay Circle to Atwater Village. They aren’t high rollers, unless you think $700,000 is a lot of dough, which I do, but not in this market. They kept seeing million-dollar fixer-uppers. Then one day a pal of theirs in Studio City noticed a for sale sign across the street. He rushed to check it out, called, and said, “Jump now.” The asking price was $650,000; 200 people showed up for the Sunday open house. Mind you, this is a sweet if simple 1950s-era, 1,350-square-foot “ranchburger,” as the wife calls it: three bedrooms, two baths, no upgrades on a 5,200-square-foot lot.

By Monday bids were pouring in, including an all-cash offer for $750,000. This couple stopped at $725,000, their max, and they were the winners only because the man who had first alerted them was chummy with the 95-year-old seller. That personal touch carried the day. In fact, would-be buyers all over town are looking for the extra angle, writing heartfelt letters—sometimes laced with pictures of kids and pets—to owners in hopes of besting the competition. I remember my mother, who was a real estate broker during previous booms, occasionally encouraging her clients to put together a warm and fuzzy family bio/pitch she could present with an offer. Now it seems a necessity.

To what do we owe this insanity? The Fed has been keeping a lid on interest rates, for one, though there has been a slight uptick. Add to that the worry our home prices are going to continue to rise. In Los Angeles they climbed 19.2 percent in a year while listings fell 36.5 percent, one of the largest year-over-year inventory declines in the country (only Orange County beat us out). There is not much available. Generally owners are staying put. Some anticipate that the market will just keep getting hotter, and others don’t know where they would go if they did give up their homes. I, for example, would never sell because I could never buy back in, though I receive an almost weekly letter from a real estate agent beseeching me to list. The last such entreaty says pointedly that I have “not maximized my footprint”—in other words, my Brentwood bungalow is small given the size of the property; ergo, I am living in one of those scrape-offs. The repository of my happiest memories would be rubble in a blink. The proffered compensation, I am informed, would be roughly $2.2 million for my 7,500-square-foot lot. Funny money, I call it, because while I could make a bundle, I would have to make a major geographical shift if I wanted to purchase another place.

A casual conversation with broker David Offer, who works my neighborhood with skill and charm, underscores that point. Based in the Brentwood Prudential office, he’s the top seller for the real estate firm nationally, closing deals on 20 houses in the first half of the year for an average of $4.35 million each. This is precious turf, the locale of many huge new “traditional” homes, the very sort that would no doubt be plunked on my land should I weaken and list—which is not going to happen, in no small part because I am a Proposition 13 beneficiary. The people who are leaving my street are moving out of state or, alas, going to retirement homes or, if they are still vital and flush, relocating to places like Venice, which is popular right now, Offer tells me, as a destination for aging boomers.

It is the young and the first-timers whom I feel bad for. You can hear the emotional and desperate hum as they try to find a home to call their own. That longing is primal; it came roaring back even in the wake of the bust just a few years ago, as various politicians and pundits were downplaying the idea of ownership because so many people had gotten in over their heads with loans they couldn’t honor. But there is something delicious about having the deed to your own inviolable space—anywhere, in any town, but maybe even more so here. You need a sacrosanct toehold in the sprawl, your own piece of paradise to be anchored to and anchored by, your own lawn to walk barefoot over. On a lovely early morning or at elegiac dusk (it’s always that, isn’t it?), I love to pad around my land, taking inventory of the terrain—as lordly as that might sound. I remember so well my first night here with my husband. I plucked some flowers from the yard and put them in the slender silver vase we had been given as a wedding present. We didn’t have much furniture yet, but the place looked dazzling to me because it belonged to us. That feeling has never left me.

Thus the craziness makes sense, with people trying to find their patch of L.A. earth. In the Eastside’s more desirable enclaves, where you can still find a residence for less than a million, the intensity has been nuts. At a point this past summer, broker Jenny Durling, who runs her own company, L.A. Property Solutions, was juggling three listings: one in Montecito Heights, one in Silver Lake, and one in Mount Washington. A 1,293-square-foot, post-and-beam midcentury number, the Silver Lake home has two bedrooms, two baths, no air-conditioning, no dining room, and it was on the market for $719,900. It has the advantage of being not only in hipster central, but also in the neighborhood of the highly regarded Ivanhoe Elementary School. Durling got eight offers, and the house went for $140,000 over the asking price. The other two properties, listed in the fives, each received 13 offers and also sold for an additional $100,000. People seemed willing to put up their firstborn child in order to acquire one of the houses, she says with a sympathetic laugh.

Like the other agents I talked to, Durling doesn’t think we are in another bubble because this time people do have the financial bona fides. The lenders are being extra vigilant, as any of us who refinanced lately can tell you. She also says that prices will begin to level off. More houses are starting to come on the market because sellers—especially those who were underwater—are now able to make a profit. When you cruise the streets now on a weekend, you are beginning to see more signs for open houses. They are, in effect, banners of optimism pointing this way and that. They are talismans of recovery, hope. I feel better when I see them clumped on a corner, knowing that people are on the move again—and not due to foreclosure. With more options for the buyers the market is sure to lose some of its white heat, and not a moment too soon.

Meanwhile those who emerge on top of a bidding war give off a grateful and victorious air. Not a smug one. They tend to know how close they came to joining the packs of the disappointed. My friends who bought in Studio City are tickled. It’s a corny word but somehow applicable to the impression I got from them when they were in town and we met to look at their new nest—which will have to be a rental until they move here. That did not diminish their obvious joy in being, after a long, frustrating search, home owners in the city they both love. The house is modest, like mine, and needs stuff fixed (the roof and the air-conditioning) and other things removed (the floral wallpaper). But as we walked around, I observed in them that quiet, pleasured sense: This is ours. There is no feeling like it.