Home Uncategorized Home Base: How Jackie Robinson’s Early Life in L.A. Made Him a... 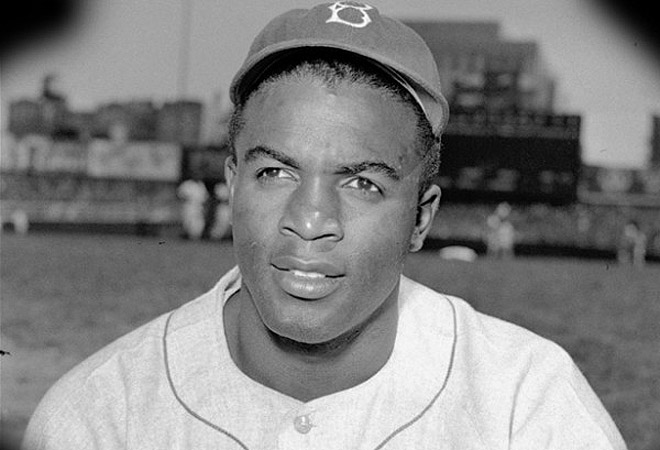 In the print campaign for the new Jackie Robinson biopic, 42, the Dodger icon (played by Chadwick Boseman) is captured midslide, mouth in a roar, legs kicking up dust, back arm dragging behind him like a ship’s rudder guiding the way. But his forearm, stretched out in a pose of fury, is the focal point: fist clenched, veins popping, flexed for a fight. The posture wasn’t dreamed up by an overzealous art director—this is how Robinson slid on the field, as if the battle for every 90 feet was one to the death. For Robinson, the first black man to play in the Major Leagues, the image isn’t just a metaphor. The film, opening April 12 (three days before every MLB player dons number 42 on Jackie Robinson Day) is certainly a Brooklyn tale; the player hung up his jersey 16 months before the Dodgers moved to L.A. But Robinson was an Angeleno, and his formative years here shaped him into a gifted athlete and savvy tactician.

Raised in Pasadena, Robinson attended the local junior college before UCLA recruited him in 1939 to be its star player for the Bruins—the university’s football team. Back then the six-foot, 180-pound 22-year-old was better known as a halfback, though he excelled in nearly all sports and lettered in four, including basketball and track. In his first baseball game he went 4 for 4 and stole home twice. While he benefited from playing on one of the most racially integrated teams in the country, Robinson encountered discomfiting prejudice. Sportswriter Paul Zimmerman’s misguided praise described the athlete as being able to “run with that ball like it was a watermelon and the guy who owned it was after him with a shotgun.” Stints in the army and the Negro Leagues would expose him to far more overt racism, so that by the time he took that famed meeting with Dodger team owner Branch Rickey (portrayed by Harrison Ford in the film), he already knew how to play the game in every respect. Before signing, Robinson promised not to react when slurs and threats were hurled at him from the cheap seats and opposing benches, and he agreed to have “guts enough not to fight back.” Instead he unleashed his anger on the base paths as he broke new ground. Maybe his forearm wasn’t raised for a fight but in victory.