Home Crime After 1,000 Guns Are Seized from a Holmby Hills Mansion, Conspiracy Theories... 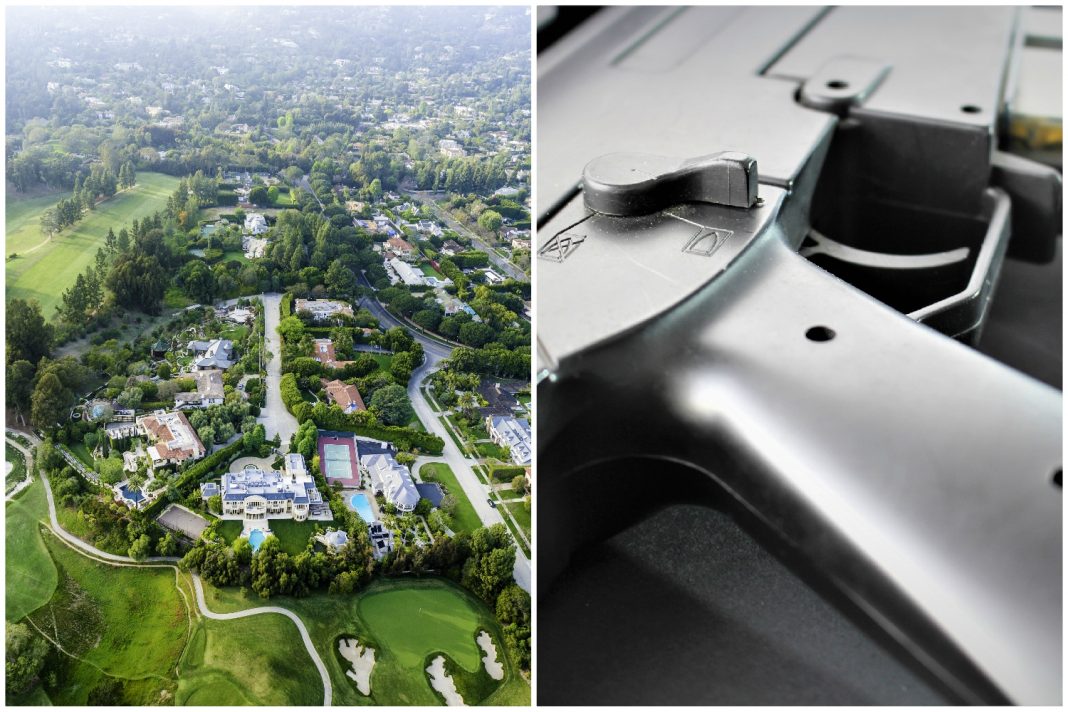 Holmby Hills is one of those bucolic neighborhoods that only looks interesting from the sky. At eye level, it’s all towering hedges and too-narrow streets, a monotony of marble colonnades and wrought-iron gates. It’s a neighborhood that seems intent on maintaining a boring and safe reputation. Where private security cars pass by every few minutes and the most interesting public attraction is a small park. The rich, after all, don’t like excitement on their own streets.

So you can only imagine the stir it caused when authorities from the LAPD and the Bureau of Alcohol, Tobacco, Firearms and Explosives seized more than 1,000 guns from one of the houses in this tony ‘hood, less than a mile from the home of Beyonce and Jay Z.

The home is listed as being owned by Cynthia Beck, who has three daughters with J. Paul Getty’s son, Gordon Getty. Authorities described the property as a “hoarder’s paradise” and it was apparently in a state of disarray when law enforcement arrived. A 57-year-old man, Girard Saenz, was inside the home at the time, and was arrested on suspicion of violating California’s law regarding assault weapons and .50-caliber Browning machine guns. Authorities say he was selling the guns.

News of the bust ricocheted across social media, drawing a range of reactions. One MAGA account guessed that Trump knew about the bust before it happened. Others pontificated that because the cachet of arms was connected (however tangentially) to the Gettys, it provided proof that the deep state was alive and well in California. There were also, of course, plenty of sarcastic tweets about the ineptitude of California’s gun laws and jokes about the neighborhood: one Twitter user posted response to the initial L.A. Times article with a photoshopped graphic that read “Straight Outta Holmby Hills.”

A lack of intel can be partially blamed for the blooming of conspiracy theories. Beck has largely stayed out of the spotlight since it was revealed that Getty was the father of her three young daughters. In a 1999 article in the L.A. Times, she was described as a “full-time mother” by her attorney, Stephen Burgin, who declined to discuss any more details of her background. “She’s not seeking publicity, and privacy is a concern,” he said.

Saenz, who owns at least a few other properties with Beck—including a home in Echo Park that seems to be in a state of disrepair—has been a licensed general building contractor since 1994, but little else is known about him.

In addition to her Holmby Hills mansion, Beck owns an impressive portfolio of property across L.A., including an abandoned beachside home in Malibu and at least a dozen other pieces of real estate.

In 2001, she began a long legal battle with her neighbors after discovering that their wall and reflecting pool encroached on her property. The court ruled in the neighbors’ favor—to the tune of $6 million in damages. In the case, Gerry Saenz was listed as Beck’s partner, agent, and litigation consultant, but their current relationship is unclear.

Much of the news about the bust employs a familiar contrast: posh setting, shocking crime. After all, this is a neighborhood with a golf course named after Armand Hammer. Frank Sinatra lived nearby! (As did Michael Jackson.) Before Barbra Streisand moved away, she lived on a street here that was once home to actors Clark Gable and Gregory Peck. And the exclusivity isn’t limited to homes: Last year, Westwood (which envelops part of Holmby Hills) had the dubious honor of being the priciest area for renters in the state, with the average apartment renting for a whopping $4,883.

Given all that, perhaps it’s not surprising that #HolmbyHills was trending on Twitter and that everyone was struggling to make sense of the raid. Even post-Madoff, and three years into Trump, we still somehow believe money inoculates people from crime. Or, as the director Peter Ramsey put it, “In Holmby Hills?!? That’s rich people land. What the hell?”

RELATED: Get to Know the Getty Family Tree