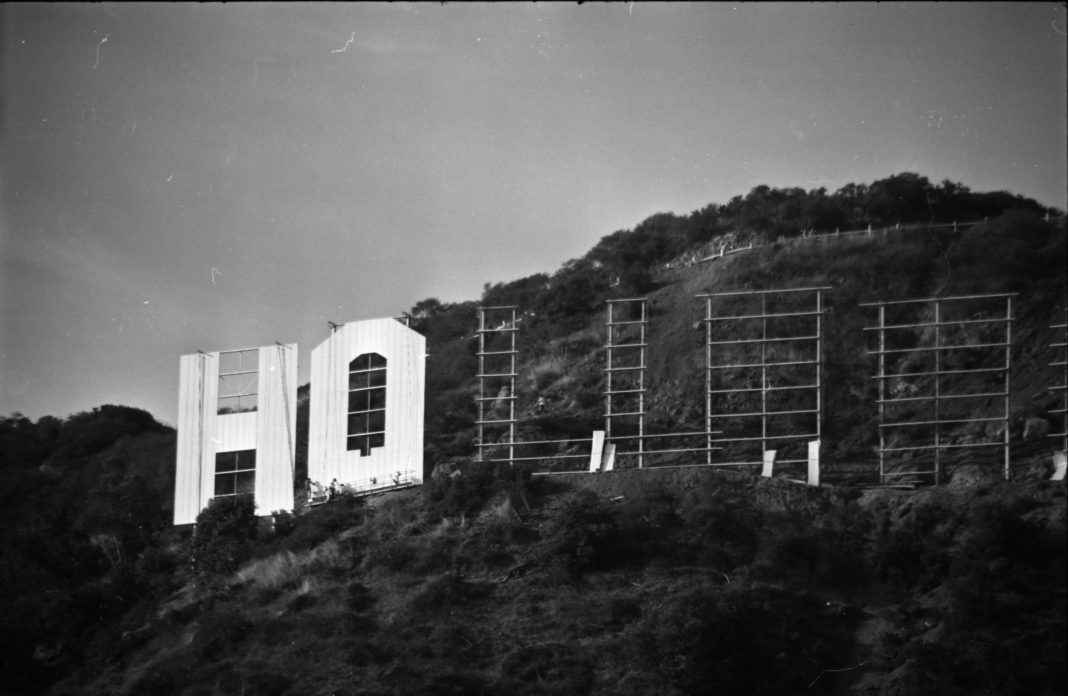 Photograph by Darius Aidala courtesy of the Hollywood Sign Trust

From an ambitious advertisement for an isolated real estate development to one of the world’s most recognized landmarks, the Hollywood Sign has been through a lot in the last 95 years. Before it could become the beloved attraction we know today, there were years of neglect and disrepair, a massive restoration project that was completed on November 11, 1978, and the ongoing work of a group of city officials and private supporters who have come together to make sure the sign lives up to its star status.

Erected for $21,000 in 1923, the Hollywood Sign was originally designed to lure city-dwellers out to a new housing development at the end of Beachwood Canyon. The “Holly Tract” offered lots where residents could enjoy spacious homes with cleaner air than in the denser downtown areas of Los Angeles. Of the group of investors who backed the Hollywoodland development–Eli Clark, Moses Sherman, Tracy Shoults, Sydney Woodruff, and Harry Chandler–there are competing stories about who exactly was the first to suggest putting up a giant, lighted advertisement. Even the Hollywood Sign Trust, which has just published a new history of the sign, dismisses most of the legends of the idea’s birth as “unreliable.”

What is known for sure is that workers carried construction materials up the steep hills by a combination of mules, a tractor, and their own hands, scrambling up ladders and scaffolds to install each of the 3,700 lightbulbs that outlined the letters. On December 3, 1923, the lights of the sign–which the Los Angeles Evening Express said was “believed to be the largest in the world”–were finally switched on. The bulbs stayed on for a decade, but required constant maintenance from a full-time caretaker. When the original Hollywoodland investors dissolved their partnership and turned the property over to the M.H. Sherman Company, the new owners gave up on the lights to cut costs.

Going dark was just the first sign of trouble for the sign. All regular maintenance was the next thing to be cut, and letters began to crumble and decay. A windstorm in 1936 felled one of the O panels, and the person who managed Hollywoodland at that time decided that the sign would be too expensive to bother with at all. Two more letters fell. After public complaints about the eyesore, some upgrades were made in 1939, but a year later the H fell over again.

M.H. Sherman Company decided to donate the the entire plot of 425 acres of undeveloped land which surrounds the sign to the city. In January, 1945, Los Angeles added the land to Griffith Park, and became responsible for the Hollywood Sign.

Letters continued to collapse and crumble, and in 1947, the Recreation and Parks Department proposed scrapping the whole thing. Then John Kingsley of the Hollywood Chamber of Commerce came in with a deal. His group would pay for some repairs, in exchange for removing the “land” from the sign, thus repurposing it as an advertisement for all of Hollywood–the neighborhood and the industry–rather than just one property. In 1949, his plan was approved, and repairs were made. That would be the last major round of repairs to the sign for nearly 25 years.

The Hollywood Sign was proclaimed a Historic-Cultural Monument in 1973. The sign was tattered, but the underlying structure was thought to be sound. A fundraising campaign raised money to replace the sheet metal and upgrade the facings. That brought the sign back as a landmark, but it didn’t last for long. A storm in 1978 banged up the sign, revealing that the underlying structure had been in worse shape than previously thought. By the end of the storm, there were missing poles, twisted panels, and sheet metal missing from every letter on the sign.

In order to save the sign this time, they were going to have to rebuild from scratch. It was time for a another fundraising campaign. Among the first to sign on to help were Hugh Hefner of Playboy and rock musician Alice Cooper. Gene Autry, Andy Williams, and Warner Bros. Records were among those who would come on board to each sponsor the construction of one of the new letters.

The old sign was removed, and a new, updated sign took its place, this time built from steel beams with concrete foundations, delivered by helicopters rather than mules. On November 11, 1978, the Hollywood Chamber of Commerce hosted a formal unveiling of the all-new Hollywood Sign.

Over the last 40 years, responsibility for the sign has been shared by the Hollywood Sign Trust, the Hollywood Chamber of Commerce, and the City of Los Angeles. The city owns the land on which the sign sits, the Chamber is responsible for licensing the sign’s image, and the nonprofit Trust is the primary body in charge of maintenance and repairs. Since ’78, the Trust has overseen multiple rounds of fresh paint on the letters, and the installation of an extensive security system guarding the property.

RELATED: A History of the Hollywood Sign in 16 Rare Photos