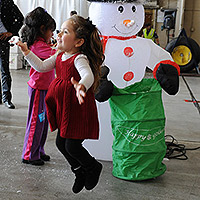 The weather outside was far from frightful, but to the delight of 100 L.A.-area children, Delta Air Lines still managed to let it snow—literally—at their annual Holiday in the Hangar event.

Last week, 50 patients from Children’s Hospital Los Angeles and 50 kids from the non-profit arts program P.S. Arts boarded a flight at LAX and headed to the “North Pole”—an empty aircraft hangar on airport grounds—for a day of winter wonderment. This is the third time the airline has hosted such an event in L.A., though they have put on a similar bash for years in New York and Atlanta (their headquarters) as well as other U.S. cities. “Los Angeles is a big market for us, and we’ve always wanted to team up with our partners locally to do events beyond what we do as an airline,” said Ranjan Goswami, Staff Vice President at Delta. “With this event, it’s our goal to provide a little bit of holiday cheer to kids who don’t have a lot of cheer right now.”

Delta pulled out all of the stops to create an authentic travel experience for their passengers: children arrived at the airport at ten a.m. and were each issued a boarding pass that read North Pole. The crowd was ushered through a security checkpoint and made its way to the gate, where all were met by a group of TSA carolers. A 30-minute taxied “flight” brought them to their final destination, an empty warehouse festooned with Christmas décor and a welcoming committee of Delta groundstaff, characters from Dreamworks films, and former L.A. Laker A.C. Green. Oh, and a snow machine.

Seeing 100 children take in the sight made the experience worthwhile for Goswami. “When we ‘landed’ and the flight attendant came over the PA and said, ‘Boys and girls, welcome to the North Pole,’ the wonder and excitement on their faces was the best part for me.”

The event included a basketball clinic (“A.C. Green was literally lifting children into the air so they could feel what it’s like to dunk,” Goswami said), a hockey clinic hosted by the L.A. Kings, and a surprise visit from Santa and Victoria Justice (presents included). Take a look at the slide show above to see the day in snapshots.