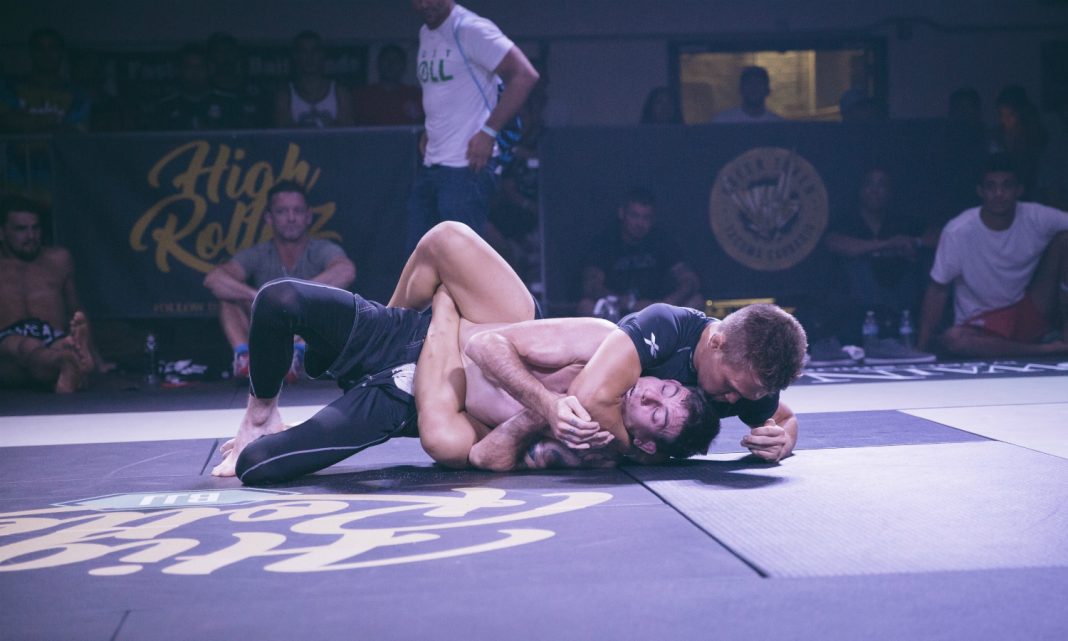 Inside a Compton gym, clouds of smoke hang in the air as fighters warm up for a jiu jitsu tournament. Besides rolling, practicing submissions, stretching, and chatting with their coaches, the competitors are also using marijuana.

For many of people, doing anything besides melting into the couch with a bag of chips after smoking pot seems like a tall order. The fighters of High Rollerz BJJ have stronger constitutions—and a higher tolerance for being high.

The main rule at High Rollerz is simple: every fighter has to use marijuana before their match. Operating on an honors system, there aren’t any rules that dictate how high they need to be, just that they must smoke out before their respective bouts. The winners of each bracket get the championship title for their division and a pound of weed. Created by Matt Staudt (of PR firm the Staudt Agency) and Lonn Howard, High Rollerz aims to break down antiquated cannabis stereotypes and introduce high-level jiu jitsu to people who otherwise might not know much about it.

Howard, a jiu jitsu practitioner himself, found that smoking cannabis before a BJJ training session or competition quelled his anxiety and helped him focus. The highly strategic martial arts discipline, which Staudt refers to as “human chess,” requires an extraordinary amount of technique and skill. Many top-level fighters, including black belts Nick and Nate Diaz (UFC), are strong proponents of the benefits of cannabis and CBD, especially for athletes. “Lonn [Howard] came up with the idea and the name, and when he approached me with the idea, I loved it. It totally made sense,” said Staudt.

Staudt, whose PR firm works with cannabis brands and MMA fighters, found sponsors for the event, and in June of this year, just a couple months after its conception, the first ever High Rollerz BJJ tournament took place. What started out as the little tournament that could turned out to be a success. “We had an incredible response, way beyond and better than what we ever imagined,” said Staudt. The tournament generated such a huge buzz that they made plans for future High Rollerz BJJ tournaments, the second of which was held on Sunday, September 9. “It took two months to fill all the [competitor] spots for the first one. When we announced the second one, the spots filled out in ten hours,” Staudt says.

A total of 66 athletes from all over the country competed at High Rollerz BJJ Round 2, and with the addition of two female brackets, there were 16 women competing. Michelle Lopez, winner of women’s expert division, said, “I love weed and I love jiu jitsu!”

Stephen Eakin trains out of San Diego and made it to the semi-finals of his division. “I wanted to compete in this tournament because I thought it would do several things for me,” Eakin says. For one thing, he wanted it to be an opportunity to let people in his Georgia hometown know that he uses cannabis. “This would be a surprise to most,” he says. “You have to keep it secret or the police would definitely come after you. It’s a small town.”

Jada Alicea trains in Orlando, Florida. “What drew me in was the exposure but mainly that it was a cannabis-infused tournament,” she says. “That sold me right away. That’s my thing. I’m that girl—the stoner chick that’s high at the gym. I’m a mom, and that shit’s stressful! So I’m always trying to relax. My escape is smoking and rolling. That’s my happy place.”

This was only the third big competition for Gina Megui, who matched up with a new opponent with short notice after her original competitor canceled. “I chose to compete in High Rollerz because the atmosphere seems really chill and fun,” she says. “And also my sponsor Step 1, a cannabis brand out of L.A., gave me the opportunity. I’m just trying to put myself out there and challenge myself.”

Albert Morales is a UFC fighter and trains out of Torrance. He says he believes marijuana has the power to help competitors like himself, on and off the mat.  “I feel like marijuana can help in many aspects of life, especially in training. It allows you to slow down and analyze situations in multiple scenarios. And pretty much, this event is filled with great competitors and dope vibes.”