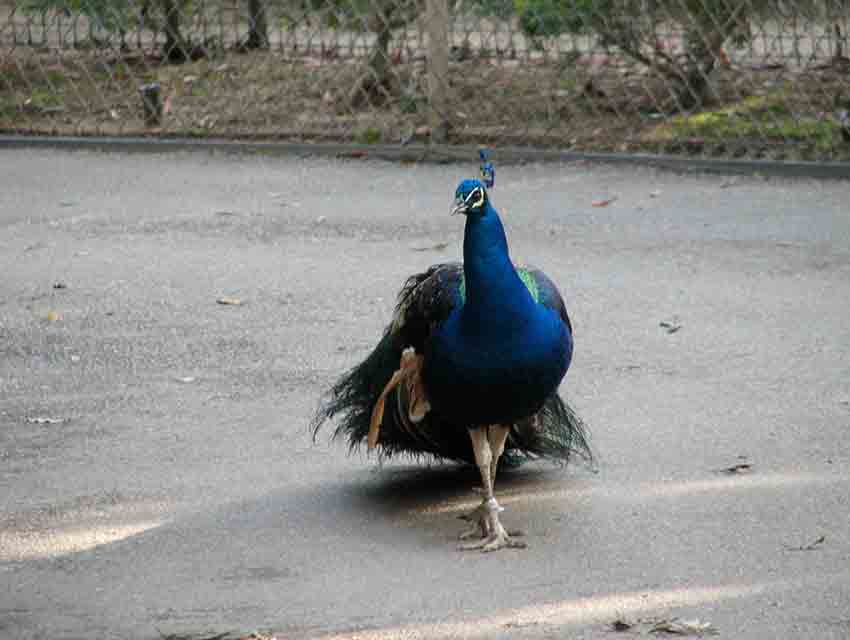 When there’s a problem, people need someone or something to blame. Among L.A. residents peeved with peafowl, Elias “Lucky” Baldwin is a favorite target. A real estate and business tycoon, he was born in Ohio and in 1853 rode a covered wagon from Wisconsin to San Francisco, where he made a fortune investing in real estate, mining, and hotels. It was his nose for timely investments that earned him the nickname “Lucky,” something he chafed against (his real middle name, Jackson, just didn’t have the same ring).

After Baldwin set up shop in Southern California in 1875, he went on to buy at least 40,000 acres of land. Though Baldwin Park and Baldwin Hills bear his name, it’s the San Gabriel town of Arcadia that’s most associated with the business prospector. Smitten with the local mountains, he bought the Rancho Santa Anita, establishing a vineyard and horse racing stables along with miles and miles of orchards.

An avid poker player who enjoyed everything his luxurious life had to offer, Baldwin had less luck with his marriages: He had three wives before settling down at age 56 with 16-year-old Lillie Bennett. The fanciful Victorian cottage he built for her still stands at the Los Angeles County Arboretum on land he deeded to the county. Along with that land came a group (the proper term: an ostentation) of peafowl. Baldwin had imported them from India after coming across the birds during his travels.

But Baldwin is almost assuredly not the person who gave peafowl to Palos Verdes Peninsula developer Frank Vanderlip. Not directly, at least. Baldwin died at age 80 in 1909, four years before Vanderlip even purchased land on the peninsula. Vicki Mack, who directed and produced the recent documentary Money Man—Frank Vanderlip and the Birth of the Federal Reserve (Vanderlip had been the assistant U.S. Treasury Secretary at one time), is “90 percent sure” that it was actually Baldwin’s daughter who supplied him four or six pairs of peafowl. Both individuals were well-to-do Angelenos, and at a time when there weren’t too many rich folk in the city, it’s likely that they would have met at a number of events, according to Mack.

Not that the Baldwins were the only ones in the area with peafowl. William Wrigley Jr., who created the chewing gum empire and possessed a hunk of Catalina Island, also owned them. Whether Baldwin’s birds were especially fertile or whether these other birds played a role, there’s been a gradual proliferation throughout the county over the past century. In fact, peafowl call more than a dozen L.A. County cities and towns home. And you can be sure that in just about any place where there are more than a handful of the big birds, there are just as many residents wishing they’d take their garden-wrecking, loudly squawking, prolifically pooping selves and fly the coop.

Why Are There Peacocks on the Street in Glendora?

The First Time the Cubs Ever Played on Wrigley Field, It Was in Los Angeles