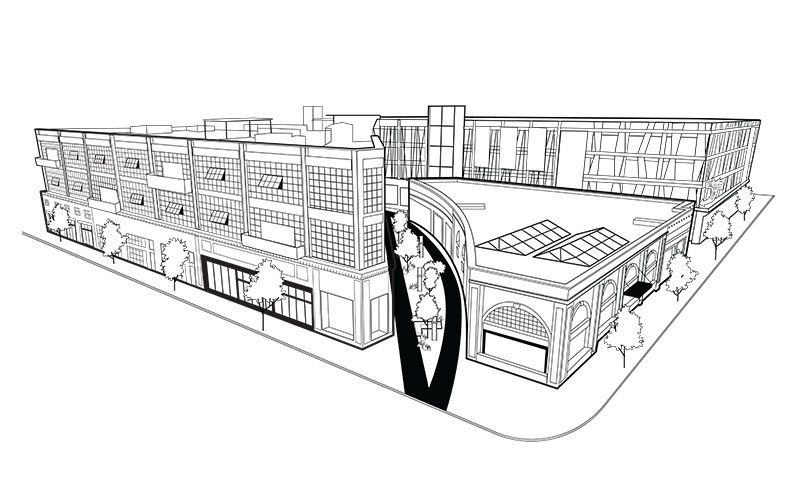 In downtown’s Arts District, real estate developments tend to be constructed from the ground up (like the horizon-long One Santa Fe) or as rehab jobs (the Urth Caffé building). The At Mateo project is both.

Built from scratch with vintage industrial flair, the major work-retail complex is clad in recycled brick. Locally harvested cobblestones pave a common area, and broad multipane windows would do any old sweatshop proud. “Our vision was to create a series of structures that look as if they were born in the neighborhood architecturally but function as new buildings,” says Robert Schnur, co-chairman of Blatteis & Schnur, which has sunk more than $80 million into the project with a capital partner.

At Mateo will be in good company. The district recently gained an exclusive Soho House to complement the indoor shooting range, bars, breweries, and heat-generating kitchens already there. Slated to open in May on land once occupied by 1970s warehouses, it sports two floors of “creative” workspace above 132,000 square feet of retail. The plan is to fill the latter with restaurants and chain-free shops that, as Schnur says, “will pull people from the Westside of L.A.” (The new parking garage should help.)

Blatteis & Schnur, whose holdings include properties in Old Pasadena and on Abbot Kinney, has a thing for areas with strong personalities—and good credit. “The psychographics of the Arts District are magnificent,” says Schnur. “The average household incomes are high. It’s a very protected neighborhood by its residents, and those who live there don’t want to live anywhere else.”