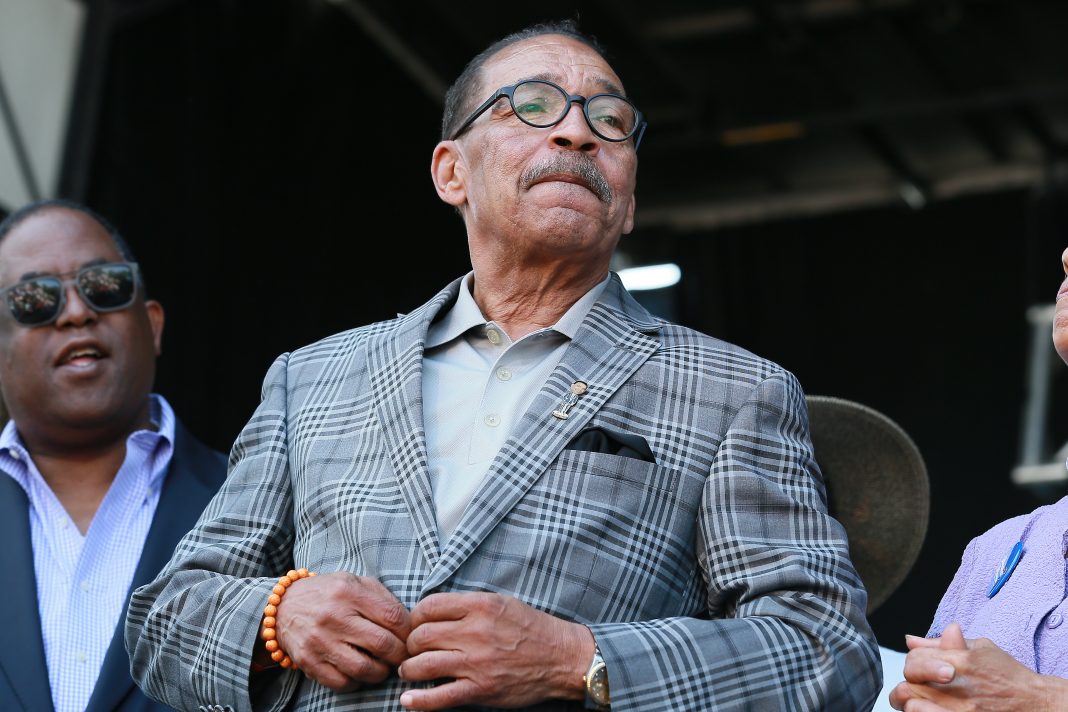 One city planning commissioner said real estate developer Michael Hakim’s proposed 27-story Koreatown residential tower would be “a tumor,” and another said approving the behemoth in a neighborhood of mostly one- to six-story buildings would violate L.A. law. Nevertheless, City Council President Herb Wesson spent years helping the project get approved. And now new reporting reveals that Wesson’s own son, Herb Wesson III, was getting an eyebrow-raising rental deal at another of Hakim’s properties the whole time.

A Los Angeles Times investigation indicated that Wesson III didn’t see a rent increase on his apartment in a 20-unit Rosewood Avenue building owned by Hakim’s Rosewood Corp. for more than five years starting in 2011, while rent for other tenants continued to rise. He was also able to secure a lease in spite of owing tens of thousands of dollars in back taxes to the the federal and state governments, according to liens filed with the Los Angeles County Clerk’s office, which some landlords might consider a red flag.

During those five years, Wesson Sr.—who represented the neighborhood as a councilman at the time—was helping another of Hakim’s companies, Colony Holdings, navigate the city’s review process to get his tower approved.

A former resident of the Rosewood Avenue building, Chelsea Jade Clemons, told the Times that Wesson III and his then-girlfriend told her explicitly in 2012 that he was receiving a discount on rent because a family member had “some kind of government role” with the city. Other neighbors report hearing similar things around the building.

If indeed Wesson III’s housing luck turns out to have been some kind of cozy arrangement, it could lead to an investigation of Wesson Sr. by the Los Angeles City Ethics Commission. Legal experts point out that elected officials are barred from using their influence to create “a private advantage or disadvantage, financial or otherwise, for any person.”

The Wesson camp disputes any insinuation that the son’s apartment dealings reflect on the father. An aide to Wesson told the Times that he, “does not arrange rental agreements for his adult children.” Hakim says he had never even heard of Wesson III until the paper called.

Meanwhile, Hakim’s tower still hasn’t gone up. In 2009, the City Planning Commission rejected Hakim’s plan to erect a 35-story structure at the site. Wesson’s office reportedly helped Hakim scale back the tower to 27 stories. Amid concerns from local activists that the tower would raise rents throughout the neighborhood and force out working class families, the commission unanimously rejected the plan a second time in 2014.

But in 2015, Mayor Garcetti got on board and backed the plan, thus making it easier to get City Council approval. Garcetti had made such a move once before, to push through a 352-unit housing complex in Harbor Gateway called the Sea Breeze; the developer of the Sea Breeze is currently facing charges of bribery and conspiracy to launder money.

Nonetheless, a judge sided with local activists and in 2018 reversed the council’s decision to approve Hakim’s Catalina Street tower, saying it had failed to properly take into account for the tower’s environmental impact. Currently, half of the site is a vacant lot.