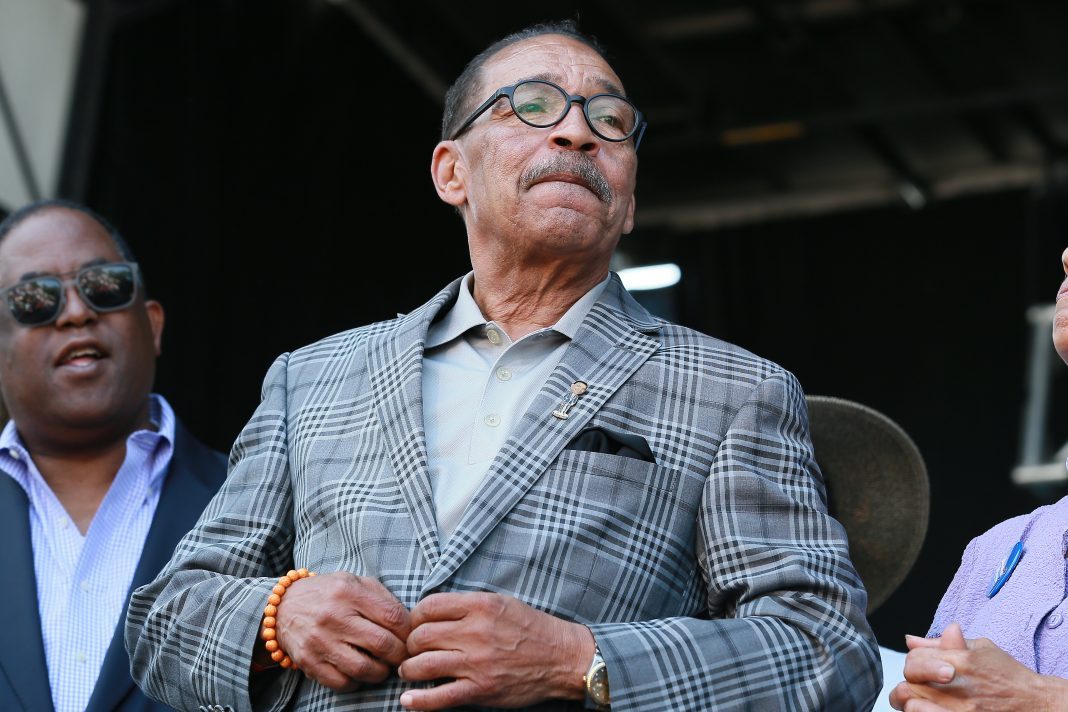 One of the fiercest, and strangest, battles to hit City Hall in some time is unfolding around the possibility of replacing suspended Councilmember Mark-Ridley Thomas. The issue has already opened a chasm among opposing factions in the 10th District, and its outcome could bolster the district’s influence with city hall and even who will be appointed interim mayor when Eric Garcetti departs to begin his stint as U.S. Ambassador to India later this year.

One week ago, reports that L.A. City Council President Nury Martinez was considering tapping a representative to replace Ridley-Thomas cracked open a fissure in the 10th District. Some constituents agree with Martinez’s plan because of the influence that would come with a replacement who could vote on city council matters. But others argue that although Ridley-Thomas has been indicted on federal bribery and fraud charges, only he, as the elected official, should have that position, or that the door should be kept open for his possible return if he is not convicted.

On Wednesday, Martinez made her next move, introducing a motion to appoint former Councilmember Herb Wesson to represent the territory that includes Koreatown, Mid-City and Crenshaw, as a voting member on the 15-person panel. He could have the gig until the end of 2022, or sooner if Ridley-Thomas is acquitted or the charges dropped.

The Wesson gambit has the distinction of making perfect sense—while also being utterly bonkers.

Wesson, who was once the speaker of the State Assembly, and who held the gavel as president of the council before Martinez, is one of the sharpest political figures in the region, a shark who for years wielded immense power. He knows the 10th, making him a fitting figure to give the district—one of three in Los Angeles with a Black elected representative—a strong voice in civic matters.

Yet Wesson is also one of the more problematic political figures around. He has endured well-chronicled personal financial issues (2016 news stories addressed default notices served on properties he owns), and he infamously once declared that former council member José Huizar, who would later be caught up in a federal investigation into an alleged pay-to-play real estate scheme, was “my brother, my best friend on the council.” Additionally, in his most recent run for office, Wesson was trounced.

Wesson possesses political skills, to be sure. He’s also got more baggage than a Samonsite showroom.

Wesson has support in some circles, and with budget season approaching, the district needs someone who can advocate for resources, which as a voting member he could provide. But on the opposing side is a cadre of loyal Ridley-Thomas supporters who assert that he never should have been suspended and that he has not had his day in court.

The U.S. Department of Justice’s Oct. 13 indictment alleges that Ridley-Thomas conspired with former USC School of Social Work Dean Marilyn Flynn on a scheme to give the politician’s son, former state Assemblyman Sebastian Ridley-Thomas, admission to a university graduate school program, along with a scholarship and a paid teaching post. The feds allege that in return Ridley-Thomas, who spent 12 years on the County Board of Supervisors, agreed to direct lucrative county contracts to the school. (Flynn, like Ridley-Thomas, has pleaded not guilty.) A trial is scheduled for August.

The indictment rocked City Hall, and sent pols into a tornado of activity. Ridley-Thomas’ offer to stay away from council meetings was ignored, and on Oct. 20 the council, led by Martinez, voted to suspend him; Controller Ron Galperin halted his pay.

In November Karly Katona, Ridley-Thomas’ chief of staff, was appointed to serve as the district’s caretaker, and while it is a significant role, it doesn’t come with voting rights. Martinez referenced that in a statement announcing her motion to bring in Wesson.

“Mr. Wesson cares deeply about the communities he represents and knows the district better than anyone,” Martinez said. “The constituents of Council District 10 need a voting member who understands their community to represent them within Council Chambers.”

Martinez’s approach is reasoned. It is also strategic. She was tight with Wesson when he served as council president, and this would give her another ally on the panel.

This could be especially important in the near future. Many city hall insiders believe that Martinez will seek to be named interim mayor after Garcetti’s departure for India before his successor is elected and installed. Other names are also being floated, and the council will vote on who gets the gig. Martinez could be bolstering the district while bolstering her next move.

This could also be a prime opportunity for Wesson to refurbish his image after his embarrassing defeat in 2020, when he ran for a post on the County Board of Supervisors (ironically the seat Ridley-Thomas was leaving due to term limits). Though Wesson carried wide name recognition, a fat war chest and a bevy of endorsements, he was crushed by Holly Mitchell in the November general election, receiving less than 40 percent of the vote.

The casual evidence thereafter suggested that Wesson had left politics for good. In late 2020, he filed papers with the state to open a consulting firm dubbed Herb Wesson & Associates. Last May, the Daily Breeze reported that Wesson was trying to win a contract with the city of Hawthorne as it formulated a cannabis program. The paper quoted him as telling the Hawthorne City Council, “I am not a politician. I am not involved in politics. I am a small minority businessman just trying to feed my family like millions of Americans.”

Wesson’s tune was different Wednesday, as he took to Twitter, for the first time since November 2020, to state, “My neighbors have once again called on me to serve and it is my responsibility to answer that call.”

Exactly how many neighbors are making the call is unknown. While Wesson has a base and, more importantly, the backing of Martinez, Ridley-Thomas’ has a core of fierce supporters who appear to be girding for battle.

The South Los Angeles Clergy for Public Accountability, a group of 12 prominent Black religious leaders in South L.A., reached out to Martinez in late January to broach their concerns. That led to a Zoom meeting with Martinez; it didn’t end well for clergy. In a Feb. 9 statement they said the discussion “leaves us more alarmed than concerned.” It added, “We remain even more convinced that this situation cannot be cured by allowing the person who unseated [Ridley-Thomas] to appoint someone to take his place.” Last week, attorney John Sweeney, representing some District 10 constituents and the civil rights organization the Southern Christian Leadership Conference, said they are prepared to sue the City Council to stop an appointment to the seat.

The council will need to vote on Martinez’s motion, and she would not be pushing Wesson if she thought her proposal might fail. Martinez has also cited a City Charter provision allowing the council to appoint someone to fill the vacancy. But there will be hurdles, including questions of whether Wesson is even eligible for the spot, given that he already served 15 years on the panel.

The net result is that the political machinations in District 10 could drag on well beyond Martinez’s pre-emptive strike to consolidate her power on the council and beyond.

Los Angeles COVID Vaccine Mandate Could Be Coming to An End