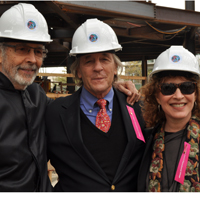 Jazz great Herb Alpert and “his muse,” wife Lani Hall, gathered with folks like Santa Monica Mayor Richard Bloom and chair of the California Arts Council Malissa Shriver at the construction site for his self-titled Educational Village in Santa Monica. Why? Phase one (steel beams are up!) is complete on the Performing Arts and Leadership Center. The New Road School and The New Visions Foundation’s Santa Monica campus is lively and creative and the 350-seat theatre that is going up will be the centerpiece of the school’s campus. The New Roads School provides college prep for Pre-K through 12 and has provided 50% of its students with need-based financial aid. Herb Alpert (the school’s benefactor) said a few words before the student council took attendees on a tour and signed the beams on the unfinished theatre. “One of the reasons that I’m so excited about education is that I never had that ah-ha feeling my entire experience,” he said about his support of the school. He and Lani will be the first to perform in the theatre in 2012. Find more info here.