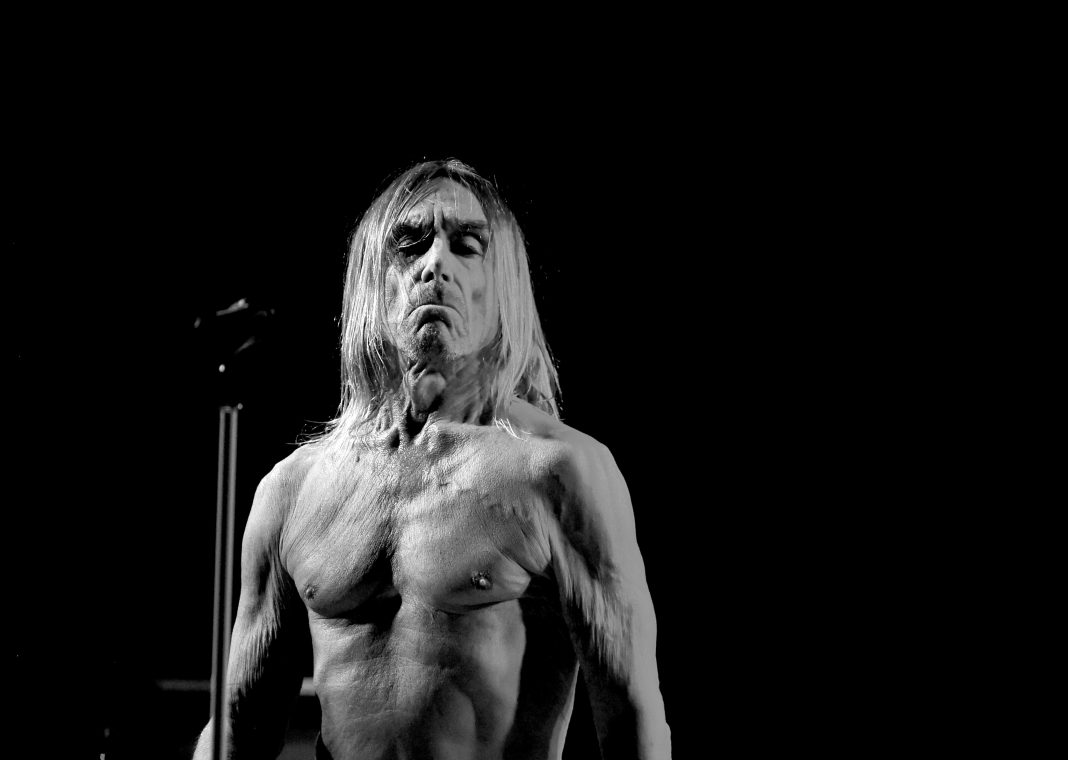 The documentary Gimme Danger is really about two Jims, born within a handful of years and less than 400 miles from each other. First is the documentarian himself, named Jarmusch. Second is the film’s subject, a singer named Osterberg who began his career in a 1960s high school band called the Iguanas; when the band broke up, all he had  to show for it was a new name, Iggy. Jim Jarmusch and Iggy Pop shared some goals, like getting the hell out of their Midwestern lives and burning a few bridges behind them. In Gimme Danger, Iggy identifies himself to a television interviewer as the guy who came to “wipe out the ’60s”—the audience laughs, but he isn’t joking. Jarmusch is the guy who came to wipe out Hollywood, and while Hollywood has survived to mass-produce comic-book movies and sequels that lose count of themselves, he embodies American independent cinema as much as anyone in the past three decades. With his mid-’80s breakthrough, Stranger Than Paradise, Jarmusch established his place in the same lineage as John Cassavetes and David Lynch before him and Quentin Tarantino after him, inheriting the priorities of his predecessors and anticipating his successors’ obsessions: the sheer drama of human interaction in Cassavetes, Lynch’s fractured narratives of surreal existence, Tarantino’s fetish for genre and B-movie glamour.

Jarmusch has written and  directed more than a dozen  features since Stranger Than  Paradise, populated by Blakean  outlaws, samurai gangstas, forlorn vampires, tourists adrift in  America, womanizers repenting for past indiscretions, and, in the upcoming Paterson, poetic bus towns made famous by other poets. All these characters are unmoored, uncertain about whether they’re looking for safe harbor or fleeing it; singer-songwriter Tom Waits has speculated that because the director’s hair went white when he was 15, Jarmusch “always felt like an immigrant in the teenage world…a benign, fascinated foreigner.” A onetime aspiring poet and part-time musician, Jarmusch makes punk movies that, defiant of Hollywood’s typical sheen, often are more performance art on film, drawing on whatever inspires him, be it the verse of William Carlos Williams or the milieu of New York’s CBGB club, whose subversive ambience informed Jarmusch’s aesthetic from the beginning. What connects most of his movies has been music, from Paradise’s opening moments—as Eszter Balint lopes along the street with her transistor blaring Screamin’ Jay Hawkins—to stories that chase down Elvis Presley’s ghost, with casts composed of Waits, Joe Strummer, Jack White, and sundry Wu-Tang Clansmen, and soundtracks by Ethiopian jazz maestro Mulatu Astatke and by Neil Young, whose single guitar scored the Blade Runner of westerns and Jarmusch’s best picture, Dead Man. The director followed this with a documentary on Young himself.

None of the musicians has had more impact on Jarmusch than Iggy Pop, especially in the company of Iggy’s notorious band, the Stooges. To tell the Stooges’ story in Gimme Danger, Jarmusch reaches into a toy chest of filmic gizmos and whiz-bangeries such as animation, stock footage, recovered photos, seen and never-seen concert tape, clips of Three Stooges comedies from which the band took its name (and then phoned First Stooge Moe Howard to confirm it was OK), shuffled with interviews of other band members, three of whom were dead by the time the movie premiered in North America at this year’s Toronto film festival. If this definitive document omits anything, it’s context, maybe because Jarmusch was disinclined to get too sociological. The Stooges emerged just as the hippie dream of the ’60s was collapsing but had yet to be rejected by its dreamers; in the face of rock’s aspiration to be more sophisticated and accepted, the Stooges were primitivism incarnate and reviled for it. A kindred spirit of Lou Reed on the East Coast and Jim Morrison in the West, both of whom laid their own siege to the zeitgeist, the man who came to wipe out the ’60s strafed the country down the middle, with the Stooges’ home base an industrial, urban Michigan commencing a half-century slide into nit and grit. “I’m a street-walking cheetah with a heart full of napalm” begins the manifesto “Search and Destroy”—not an empty boast. By comparison Morrison sounded like the Turtles, and Reed seemed as threatening as Burt Bacharach.

Time hasn’t diminished the squall of songs like “I Wanna Be Your Dog” or their backdrop to Iggy’s one-man carnival of self-destruction, in which he routinely bled in public, had unnatural relations with a peanut butter jar, and swan-dived from the stage before it was understood that the audience was supposed to catch him. His impact on music—from Patti Smith to the Sex Pistols to Sonic Youth to Kurt Cobain—has been so massive as to be clichéd (David Bowie’s most famous album isn’t titled Ziggy Stardust by accident), with capitalist culture’s only resort being to appropriate his cool cachet; now TV ads sell cars and promote cruise lines to “Search and Destroy” and “Lust for Life.” When I started teaching art school 15 years ago, I noticed something interesting about my students’ musical tastes: “We missed it,” a young woman complained at the close of one class, by which she meant not Radiohead at her end of the musical time line nor the Beatles at mine but what came between. Born a decade after the Stooges’ debut, she wore an Iggy Pop T-shirt, one of two or three I saw in every class without a Coldplay in sight. A decade later, my own 18-year-old starting art school is spinning a vinyl copy of 1981’s Party, one of Iggy’s many uneven post-Stooges solo records, on his vintage turntable. Twenty One Pilots couldn’t mean less to him. This is all anecdotal, I realize, and may rightfully be considered simply old-fogeyism on my part; obviously Twenty One Pilots means something to someone. But a lot of the twenty and thirtysomethings who drive the culture if not the marketplace favor Iggy’s white-noise harmonics that leak from the cracks of time and represent possibilities—at once thrilling and unsettling—that emerged from the debris of a ’60s utopianism too quaint, smug, and naive.

Tellingly Gimme Danger arrives amid a flood of recent docs, biopics, and TV series that plunder the archival history of Bessie Smith, Hank Williams, Miles Davis, John Coltrane, Chet Baker, Nina Simone, James Brown, the Beatles, the Rolling Stones, Jimi Hendrix, Janis Joplin, N.W.A., Kurt Cobain, and Elvis meeting Richard Nixon, with Elton John and Freddie Mercury and the Ramones and the Smiths in projects forthcoming. Amy Winehouse is the only one whom most of today’s audiences remember from their own lifetimes. The movies aren’t done with Jim Osterberg, either. A film bio, Lust for Life, has been off and on front and back burners for several years, while a current British thriller, Blood Orange, stars Iggy as an aging rock star who is Iggy in all but name. In the meantime Jim Jarmusch is now firmly in his seventh decade, and whether he means to lose himself in his past with Gimme Danger or say good-bye to it once and for all may not be clearer to him than to us. As the film winds to a close with a roll call of artists influenced by the Stooges flashing before our eyes at growing velocity, you can’t help sensing that, unwittingly, Jarmusch makes the case for himself, too. Stopping for a moment to take stock, the aging rebels Jim look around, notice they’re old and that it’s twilight. The day will come when even Iggy Pop isn’t on anybody’s T-shirt anymore.