Home Crime Haunted For a Living: What It Is Like To Work Murder Mysteries 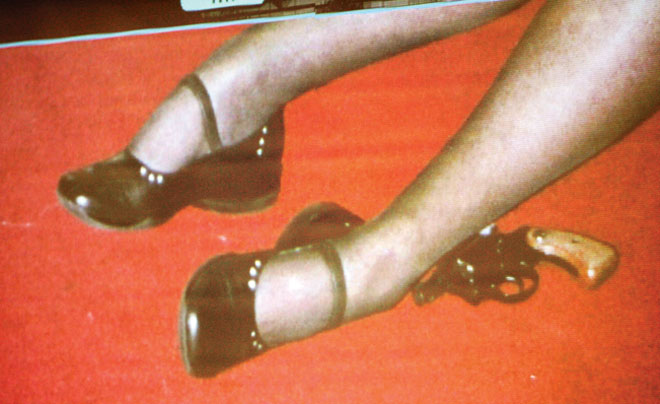 Lana Clarkson and the Colt revolver that Phil Spector used to kill her in 2003. Photograph Mario Anzuoni/Getty Images

I started working homicide in the 77th Street Division in South L.A. in 1986. That was during the rock cocaine epidemic, when 77th had a record high number of murders. The victims were primarily young black males between the ages of 17 and 22. Assault weapons were prevalent, and the ammunition they were using was crazy stuff from China: steel-core, copper-jacketed rounds for AKs. Houses and bystanders and cars would be shot up. Nowadays drive-bys are almost old news. Gang members are bolder. They’ll drop off the suspect and circle around the block while he walks up and shoots you.

Since I started, the homicide units I’ve been assigned to have handled over 7,000 cases. Murders are at an all-time low these days, but it’s tough for me to drive around South L.A.: I’ve been to pretty much every corner, every business, and every other house. It’s, like, total recall. Still, I have a difficult time remembering the first homicide I responded to; I think it’s only because a lot of “firsts” come to mind, like the first child victim or first double or triple, or the first murder I worked on that took place on a holiday.

One case that still bothers me involved a woman by the name of Michelle Lovely. It was December 21, 1987. She and a young nephew or cousin were on their way to LAX to pick up her twin sister. They stopped at a liquor store to get some soft drinks and snacks. As she got back into the car, the suspect walked up—somebody in his late teens, most likely a gang member—and reached into the car to grab her purse. She fought, and he shot her in the head. I knew I’d have to visit the hospital to see the family, something that is always very difficult. You have to go to a different place in your head; a lot of times it’s all you can do to keep from crying. What made it tougher was, I could relate to this family. She was going to see her twin, her dad was a preacher, and they were all getting together for the holidays. The case remains unsolved. We did recover some fingerprints, and every year I’ll have them rerun those prints to see if we get a hit.

When a loved one’s killed, the family often connects with the detective they dealt with. So on birthdays, anniversaries, the day of the death, we get phone calls, letters, postcards. I get invited to baptisms, weddings, and gatherings. At crime scenes I’ll be approached by a grandma, an auntie—someone who recognizes me. And if the kids or the gangsters see me talking to folks who are respected in the neighborhood, it can loosen them up to talk, too. When I was younger, I learned that driving up to gang members without drawing any guns or throwing anybody against the wall went a long way. You’d have better luck buying a couple beers at the store, leaning against the car, and talking or having a cigarette with a few guys.

No two interrogations are alike. A lot is based on the character or the makeup of the person being interviewed, of course, but we have our trade secrets that, thank goodness, nobody’s brought out on TV. With seasoned criminals, it can be a battle of wits. They know what they did. They know what the evidence is. They know who’s talking or not. You need to go in there prepared with facts. Can you lie? Can you cheat? Can you curse in the interview? Sure. “We have your fingerprints at the scene.” That’s a lie we can make. Can we make promises? No. There are limitations. But a detective won’t be satisfied without a confession or an admission of guilt. Sometimes, though, what someone omits from their responses can be just as good as admitting to having done the deed.

A haunting part of this job is all the bodies. Each one takes a piece of your heart. We treat every case as if it were our own loved one, but sometimes I can’t look at myself in the mirror and feel good about it, knowing that so much of the investigation is being affected by the city’s many other priorities. Lack of personnel, lack of equipment, lack of resources—we’re dealing with the same frustrations I was dealing with 26 years ago. There’s so much more that we could do.

LAPD Officers Had Three ‘Unintentional Discharge’ Incidents in One Week

Rick Caruso Missed About 40 Percent of Meetings as LAPD Commissioner