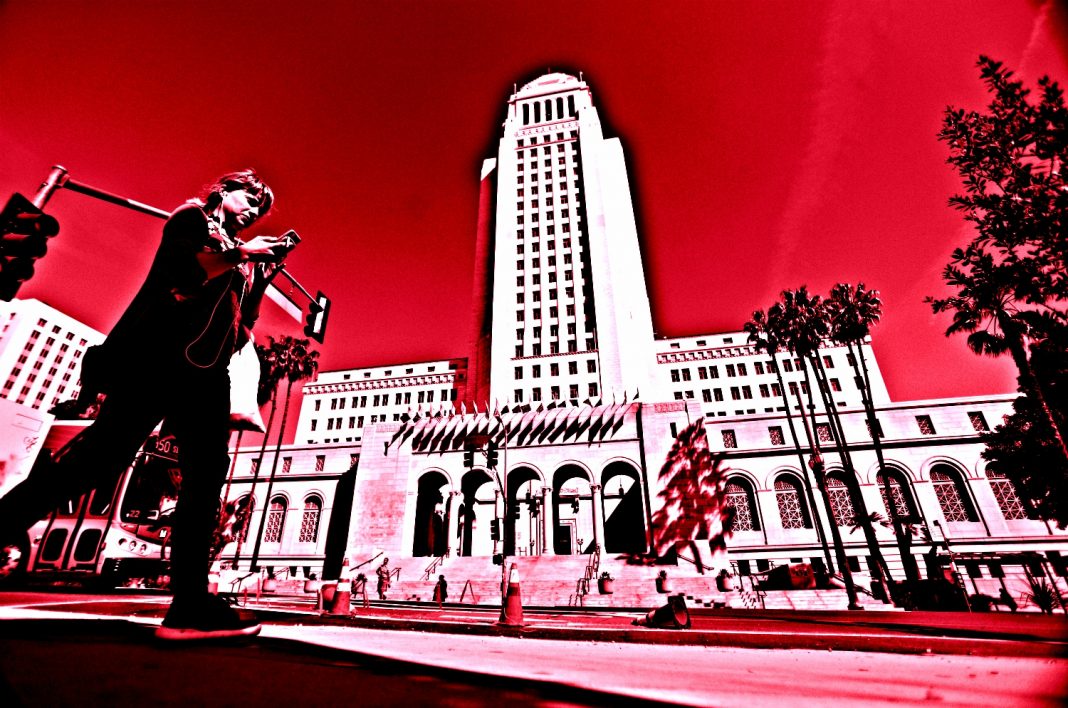 Every year, people in Los Angeles shudder in fear, overwhelmed by the practitioners of the darkest of the dark arts. No, I’m not talking about the happenings in a haunted house or what fills the streets and alleys on Halloween, but rather, what occurs on any regular day in that most dastardly of downtown buildings: City Hall.

In honor of October 31, I’ve followed a nameless individual on an excursion into the horrorscape inhabited by the likes of Mayor Eric Grave-cetti, City Attorney Monster Mike Feuer, and councilmembers Headless Herb Wesson, Bob Boo-menfield, and Paul-bearer Krekorian. All that follows is made up…or is it?

Show Him the Money

You enter the stately building on Spring Street, and as soon as you pass through the metal detector, a man in a shiny, dark suit approaches, hand extended. “I’m running for re-election next March,” he announces with a thousand-watt smile, “and I’d—.” You interrupt, “I know, you’d like my vote.” The man, who you swear you’ve seen on the council floor, shoots you a disgusted look. “No,” he proclaims. “I said I’m running for re-election. I need a donation. By city law you can give up to $800.” You’re confused. “Don’t you want my vote? Isn’t that more important?” Brushing imaginary dust off his shoulder, he gives you a pitying look. “Yes, I want your vote, but what I really need is $800,” he says. “You do want to do my business in my district this year, don’t you? Not that there’s any quid pro quo, no siree.” You’re utterly perplexed, as well as a little bit scared, and he can see it. “Rookie,” he snorts and turns his attention to the next person walking through the door.

You walk down the hall, when suddenly a piece of paper flies through the air and smacks you in the face. You glance at it and see a recent press release from Council President Herb Wesson proposing a $30 minimum wage for Lyft and Uber drivers. Strange, you think—isn’t Wesson termed out and running for County Supervisor next year? Before you can ponder that deeply, another piece of paper conks you in the noggin. Again, it’s a Wesson proposal, this one to explore opening a public bank in L.A. That’s odd. Didn’t voters shoot down creating a public bank just last year? You wonder if this could possibly have anything to do with that supervisor’s race. Then slap, you’re hit with another piece of paper touting Wesson’s push to explore anti-displacement zones around certain large housing projects. But wait—if Wesson is leaving the city, why is he behind all these efforts to address topics with countywide appeal. The council prez couldn’t be using one office to prepare for another, could he? Feeling a little disgusted, you walk away.

You hear a murmur around the corner. You approach and it becomes a roar. You see a plethora of L.A. elected officials dancing around a bonfire. “Never Trump!” shouts one, and immediately another says, even louder, “I oppose Trump even more than you!” “No!” screams a third, “I oppose Trump most of all. I’ll never work with him!” The noise is deafening but repetitive, and you’re waiting for action or an actual plan. It doesn’t come. “I’ve been against Trump since I was elected!” shouts one man. “I’ve been against him for decades!” yelps another. “I’ve opposed him since I was a baby!” harrumphs a third. The anti-Trump chorus continues, with the politicians just restating things you already felt. After hearing the same lines forever, you take a seat on a wooden bench and fall asleep.

You wake up groggy. There’s something on you—someone kindly placed a jacket over you while you were sleeping. It’s cold, so you put your arms in the sleeves. You stand and walk toward the council offices. A woman sees you and points. “No!” she screams, and darts into a room and slams the door behind her. You continue down the hall and see a man who resembles a council aide. His face turns ashen. “They’re back!” he shouts and begins texting as he races around the corner. Three more people step into the hallway, but each looks as if they have seen the devil himself. “Why are you here again?” they scream-ask in unison. They all are staring at the jacket. You look down, and you understand why everyone in City Hall is afraid. It’s a nice blue jacket, and it has big yellow letters that read “FBI.” They think after two City Hall raids by the bureau in the past year, a third is underway. More doors slam shut.

You keep walking, then pass a doorway and hear a crackling sound. You peer inside. There’s a wall furnace and a grim man is stoking a blazing fire. He keeps picking up little round things from a huge pile and tosses them in. What could be so useless that it needs to be burned, you wonder. You pick up a round thing and realize it’s a red, white, and, blue campaign button. Suddenly you understand why it is being incinerated. The text on the button says “Garcetti for President, 2020.” You toss it into the fire and leave the room.

You turn a corner and see about a dozen people standing in a circle with something flying through the air. It’s brown. You watch, and every time the oblong object lands in someone’s hand they let out a painful yelp and then toss it again. “Ouch,” says a man as he catches and then instantly throws it. “That burns.” You look closely. Is that a potato? It is! Wait, does it say “Homelessness” on it? It does! Do the people in a circle in City Hall keep trying to pass the Homelessness Hot Potato? They do! You watch and the cycle repeats, and it seems that everyone is waiting for someone else to take control of the Homelessness Hot Potato. Knowing this could go on forever, you walk away.

You need fresh air. You head outside and find yourself in a quiet courtyard. How curious, you never noticed there were tombstones here. You look closely and see they hold the names of politicians who left City Hall under wiggly circumstances. You hear a shoveling sound, look to your left, and see a group of people in dark jackets digging holes. As they dig, others are setting up more tombstones. Who are these people? You look and realize that their jackets, like yours, bear the letters F, B, and I. You wonder why people with FBI jackets are digging City Hall graves, but before you can ask, they turn to you en masse, give a knowing smile, and march back into the structure that is the seat of Los Angeles government. Soon, cries of horror are heard from inside the building. So is the clink of handcuffs.